After a day of shopping in Antwerp, we really wanted some mussels. We looked for a place near the Grand Place and we found a perfect place outside at restaurant De Bomma, grandma´s restaurant. Here you can eat traditional Belgian dishes such as beef stew with beer, rabbit stew, sausage, …. The nice thing is that you can compose your own meal by choosing the meat you want and combine it with vegetables and some potatoes the way you want it.

When we were seated, we got a carafe of water and we choose to take an aperitif of the house, which was with elixir d´anvers. We ordered mussels in white wine, although all the other dishes sounded really appetizing. The fries were served in a separate basket and were nice and thickly cut. With the mussels, there were also more than enough vegetables, only the taste of the white wine was not really present. 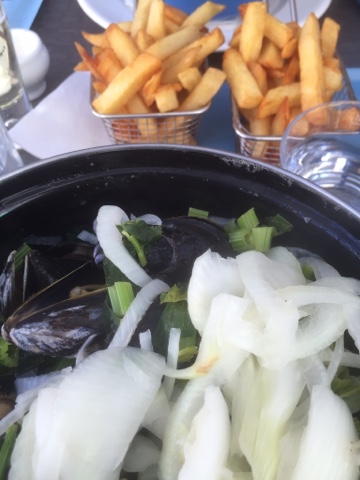 We still had some room left for dessert. They all looked soo good, but after some time I decided to go for the tarte tatin while my boyfriend ordered the tiramisu. 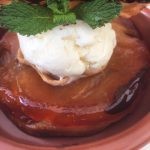 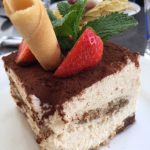 Both desserts were presented with care and the portions were more than enough. The tarte tatin was lukewarm with some crisp of the sugar.

De Bomma is a restaurant if you want to have some traditional Belgium food. Everything is prepared and presented with great care and with a lot of flavours. Next time I will try the trio of stew.