What to do in Des Moines - Travel Eat Enjoy Repeat

What to do in Des Moines

When we were interviewed at the airport in Amsterdam about our trip to the US, we got the question why Des Moines? Why? Well, we were invited to celebrate the wedding of friends. It was a very nice and lovely experience to be part of. We had a very good time in Des Moines and had the chance to catch up with old friends.

The days before the wedding we were shown around Des Moines by a friend. We got a private tour of the Iowa State Capital, home of the Iowa Senate, the Iowa House of Representatives, and the office of the Governor. The building was built around 1871 on top of a hill with a great view of the city. The one thing that stands out from the outside (and inside) is the dome, constructed of iron and brick and covered with 23 karat gold. 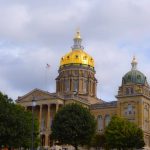 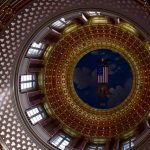 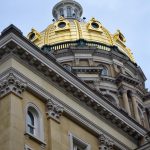 When you stand under the dome, there are broad corridors that extend in all directions. Over the staircase, there is a painting, Westword, which is an idealized representation of the coming of the people who made Iowa.

An interesting thing shown in a hall is a collection of porcelain dolls representing the Governors wife’s in miniature with the dresses they wore at the inauguration.

You also have the opportunity to go into the rooms where the Iowa Senate and the Iowa House of Representatives have their meetings.

And then there is, for me, the most beautiful part, the law library. Its main features are the winding stairs at the sides. The whole library is finished with ash and chestnut wood.

In the afternoon, we visited Des Moines Art Center, that has a collection comprised of 20th and 21st-century works of modern and contemporary art. For me, the most interesting painting is The Study After Velasquez’s portrait of Pope Innocent X by Francis Bacon. It is said that this was used as the basis for the make-up of The Joker in The Dark Knight.

We also visited the Pappajohn Sculpture Park that is a nice place to walk in on a sunny day, to relax, and apparently also to catch Pokemon. 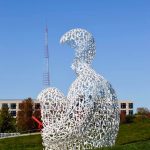 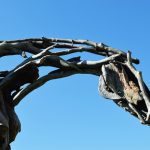 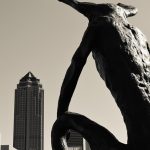 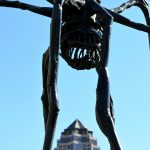 Still not convinced why you need to visit Des Moines? Here are 6 reasons.

A great benefit of having friends showing you around is the places they know where you can have fantastic food. At La Mie Bakery we had a very tasty breakfast of eggs and amazing pastries. 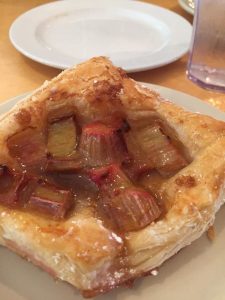 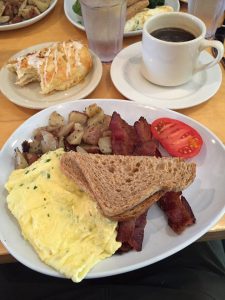 scrambles eggs with bacon and potato and a pastry

We also had their pastries at the farmers market the day after. 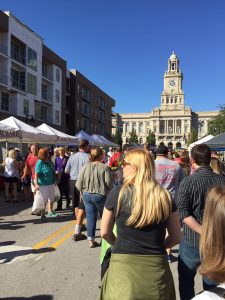 For lunch, we went to The Cheese Shop. They have a wide selection of American cheeses that you can buy, but you can also have some food there. There is also a wide offer of beer and wine. We had a cheese platter to start with, followed by sandwiches: a bacon and blue cheese tosti, a pig and fig sandwich, and a banh mi sandwich. 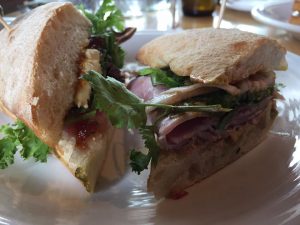 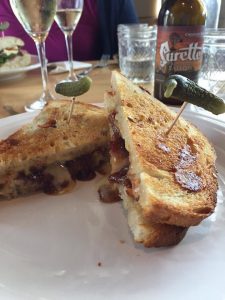 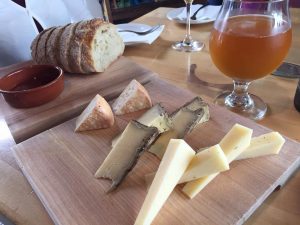 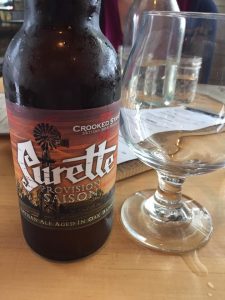 These were delicious, especially the banh mi, which was my favorite. I will try to make this one at home. This really is a great place to have lunch or just have a good glass of wine with some cheese.

We had a fantastic time in Des Moines and we were sad to leave but we had to go on, to Sioux Falls.  This was a short stop on our way to Badlands. We stopped at the Falls Park for a quick view of the Falls. 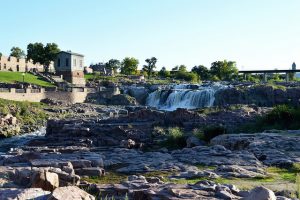 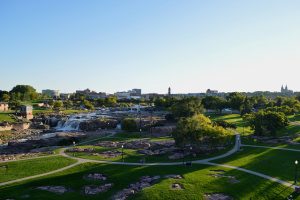 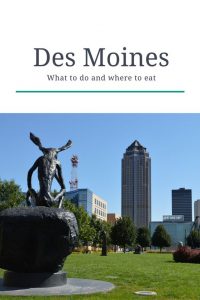