Ypres is a city with a lot of history. The city was completely destroyed during the First World War and completely rebuilt afterward. The city has a lot to offer for a weekend away: interesting museums, beautiful buildings, interesting walks in the area and of course good food and drinks.

Here are 10 tips for a weekend in Ypres:

What to see and do in Ypres

The war past of the city of Ypres is still present everywhere. And that is also noticeable in the things you can see and do in Ypres.

The main purpose of the city walls was to protect the people of the city. The fortress was converted into a huge complex with pre-fortifications by the famous French engineer Vauban around 1680. Many of the fortifications have been fairly preserved and are connected by the 4.5km long fortress route. You can start the walk at 5 different points. And this route also passes by the Menin Gate, perfect as a start to explore the city. The full route can be found here. 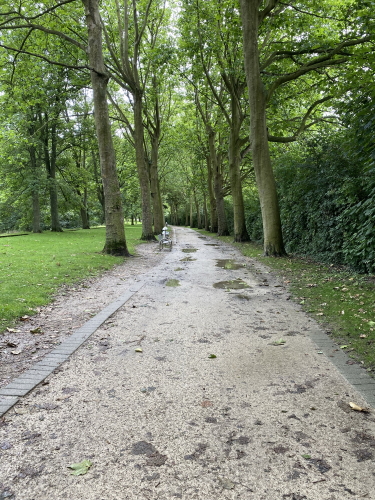 The Menin Gate is located where the medieval city gate used to be. Through this gate, the British troops left for the front to defend the Ypres Salient.

Since 1928, the Last Post has been blown under the gate every evening at 8 pm as a tribute to all those who fell. 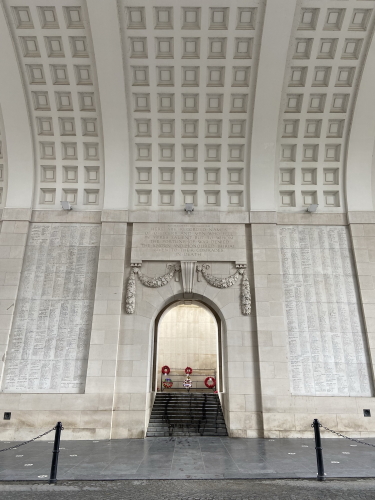 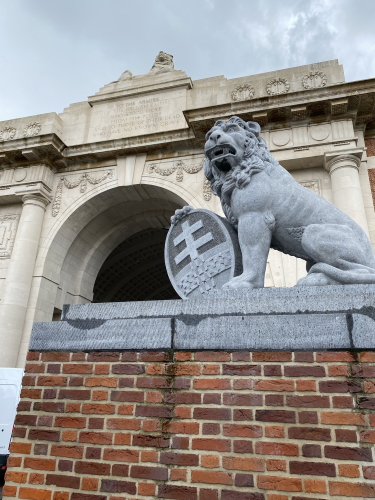 The Grand Place of Ypres is the second largest in Flanders and is the center of the city. The Cloth Hall and the Belfry are also located here. Most of the buildings around the Grand Place were destroyed during the First World War but rebuilt in the 1920s. 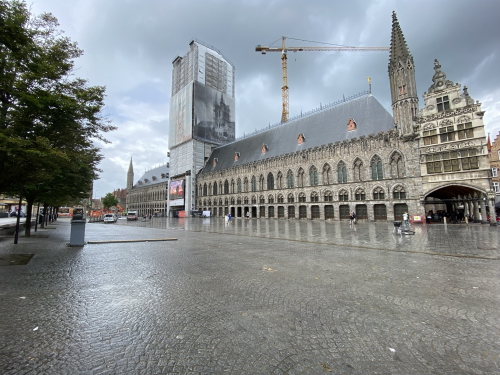 During the First World War, the Ypres region was badly hit. In this museum, you will learn everything about the “Great War”: from the invasion and the first months to the exhausting trench warfare and the end of the war. The focus of the museum is mainly on the human experience of the war: you can listen to testimonies of the ordinary population, but also of the soldiers of the different armies that took part in this war. By means of a poppy bracelet, you can discover the personal stories of the ‘ordinary man/woman’.

The museum is very interactive: through photos, visual testimonials, maps, … you will learn everything about this devastating war. Allow at least 1-2 hours to visit the In Flanders Field Museum. 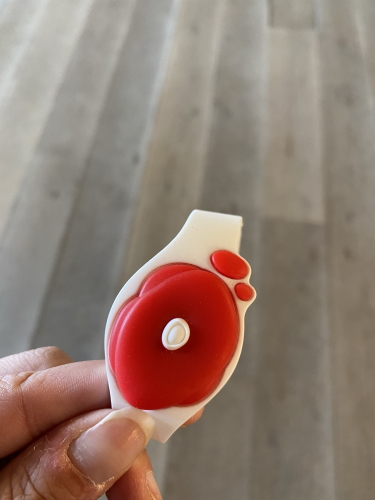 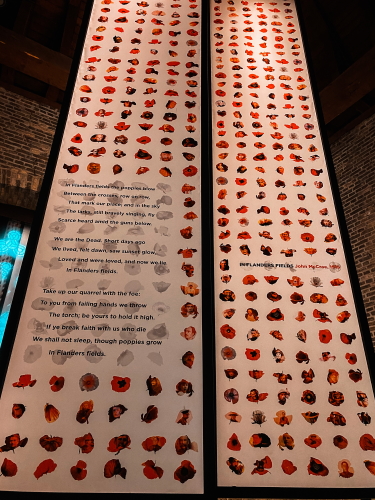 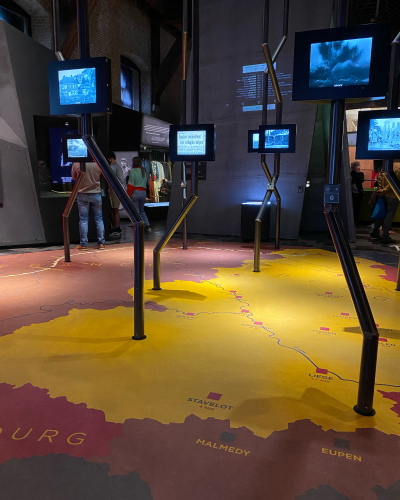 Right next to the In Flanders Field Museum, you can find the Yper Museum. Here you will learn everything about the rich history of Ypres and the Westhoek. There is even a giant scale model of the city. By means of a bracelet with a cat’s paw, it becomes an interactive visit.

Casemates are actually basements that are part of the fortifications around the city of Ypres. The Casemates were built around 1680 on the Houten Paard according to plans by the aforementioned Vauban. Over the centuries they were used as a storage place and sleeping and shelter and command post. The British soldier’s newspaper The Wipers Times was also printed here.

Today you can find the city brewery Kazematten in this unique location. And it is possible to book a guided tour. There are different times available from Wednesday to Saturday that you can book via the website.

For a tour, you pay €10 and you can also enjoy 3 beers: a blond beer, brown beer, and a triple. This was one of the best brewery tours I’ve been on. The beers were also delicious to drink. https://untappd.com/BrouwerijKazematten 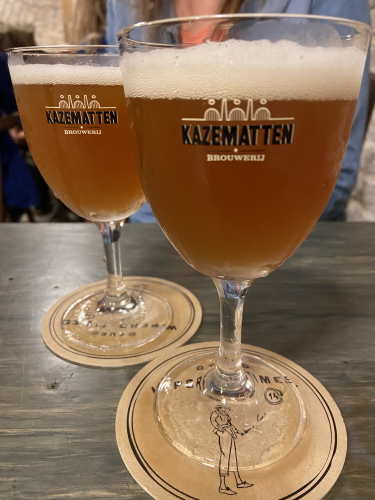 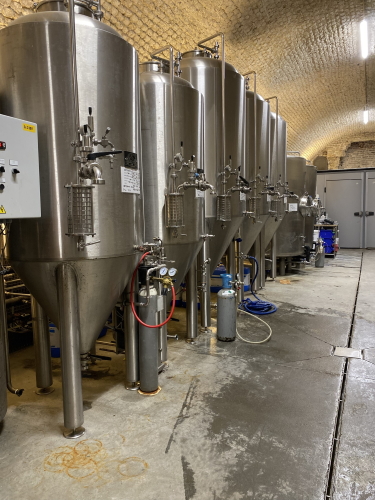 The Memorial Museum Passchendaele 1917 is housed in the historic castle grounds of Zonnebeke. Several walks also depart from this domain to, among other things, the Polygon Wood and Tyne Cott Cemetery.

You start the museum visit with an overview of the war in the region around Ypres through all kinds of objects, documents, and uniforms. Then you will discover how the British began to live underground in 1917 in the so-called Dugouts. You will conclude with a visit to a reconstruction of the German and British trenches.

It took us about 2 hours to complete our visit. 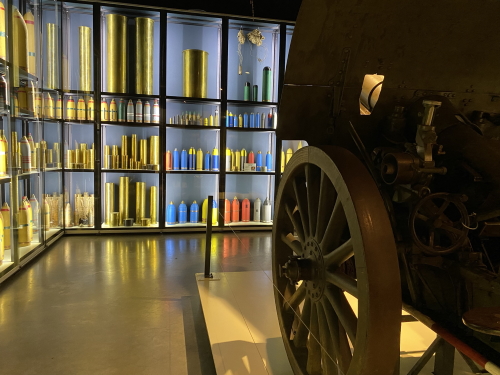 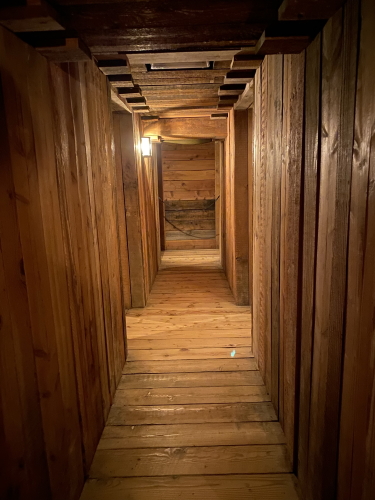 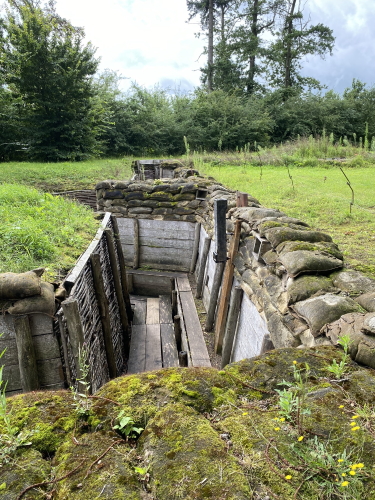 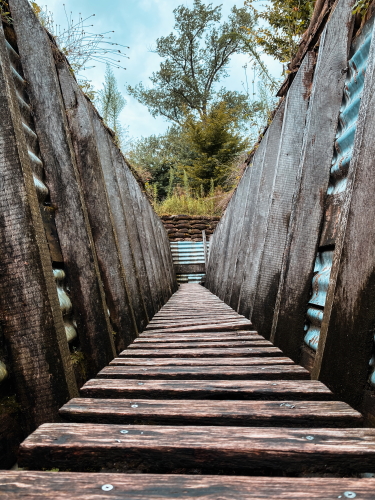 At the end of the First World War, 100s of military cemeteries were built in Westhoek. And so in the region around Ypres.

Tyne Cott Cemetery in Passchendaele is the largest British soldier cemetery with nearly 12,000 graves and a memorial to nearly 35,000 missings. The name comes from a small farm that was located on the first German front line and was surrounded by casemates and bunkers. The farm was captured by an Australian division in 1917, after which the dead were buried here.

The cemetery consists of the central Cross of Sacrifice followed by the cemetery or Battle Cemetery and the Stone of Remembrance. The memorial to the missing, The Missing Memorial, is at the rear and was built because the Menin Gate was too small to list all the missing.

The largest French military cemetery on Belgian soil is that of Saint-Charles de Potyze: about 4,200 French soldiers are buried here. The 2 cemeteries in Zonnebeke, Polygon Wood Cemetery, and Buttes New British Cemetery form 1 whole. About 80% of the fallen soldiers buried here are unknown soldiers. Here you will also find a memorial to the Australian and New Zealand soldiers who fell in and around Polygon Forest.

More information about sites and cemeteries in and around Ypres can be found here: https://www.toerismeieper.be/wo1-sites 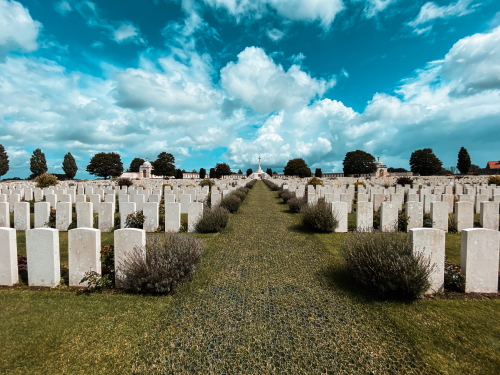 In Ypres itself, all sights are within walking distance of each other. But you can also enjoy beautiful nature walks south of Ypres. More information about the walking routes can be found here.

Ypres is also the perfect start to explore Westhoek by bike. The Westhoek Cycling Network has approximately 1,100 km of cycling routes through polders, hills, and picturesque villages. More information can be found on the Ypres tourism website: https://www.toerismeieper.be/fietsenvanuitieper

The Bellewaerde amusement park is also near Ypres. It was established in 1954 as a zoo and safari park and is the oldest working theme park in Belgium. Here you can not only enjoy attractions for young and old but there is also an animal park. The park is divided into different “themes” each with its own attractions and animals that you can see. In addition, there is also an aqua park.

Where to eat in Ypres

A stone’s throw from the Grote Markt is Santé, a small eatery. We enjoyed a quick lunch with a croque madame. Very fast and friendly service. 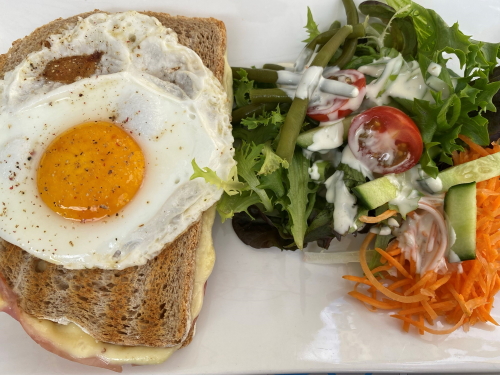 This restaurant was recommended by several people so it had to be very good. And it was. We were kindly received in the beautiful restaurant and had some difficulty choosing between all the goodies on the menu. We started with some antipasti after which I went for a salad De Fonderie and my friend for the pasta vongole suggestion.

The salad De Fonderie is a richly filled salad with scampi, smoked salmon, raw ham, scallops, and foie gras. The pasta vongole was a generous portion with lots of clams and a delicious sauce.

A dessert was unfortunately no longer included, but definitely recommended! Reservations are recommended on weekends! 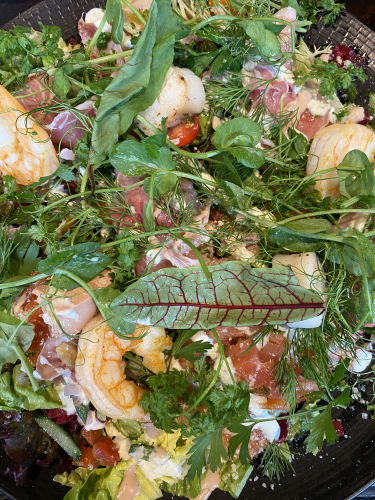 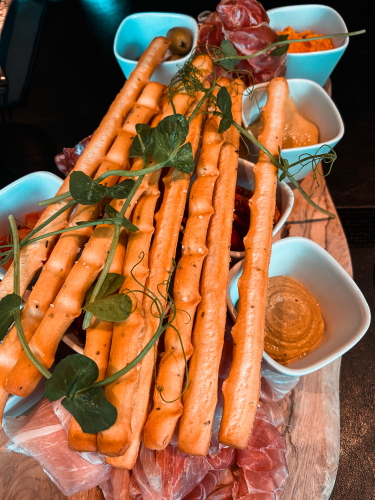 Les Halles is located right on the Grote Markt of Ypres and is a household name in the city. You can enjoy both tapas and the usual classic dishes. We had the shrimp croquettes salad for lunch: a good portion of vegetables with 2 super tasty shrimp croquettes. Perfect for lunch! 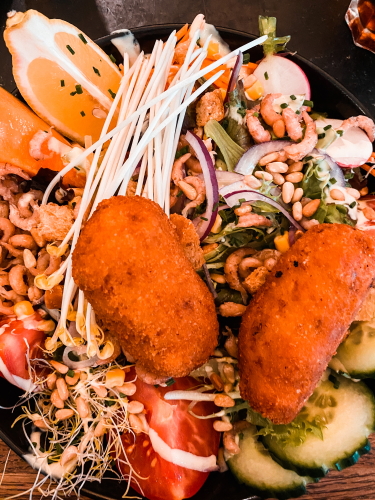 Where to stay in ypres

During our weekend in Ypres we stayed in B&B Juliette’s, a stone’s throw from the Grote Markt and with free parking in front of the door. The lovely room had everything we needed, even biscuits and chocolate were provided. The owner is also happy to give you tips about what to do in Ypres and the surrounding area. And in the morning you can enjoy a breakfast with delicious fresh coffee cakes, bread, and spreads. The ideal base to discover Ypres. 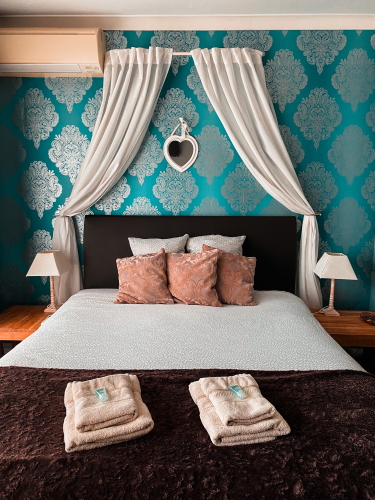 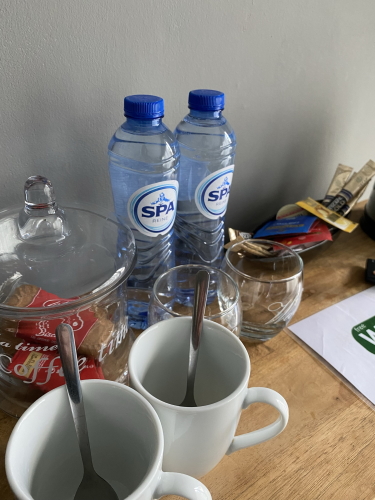 How to get to Ypres?

From Brussels and Ghent you can easily reach Ypres by train. Check the website of the NMBS in advance for the timetable 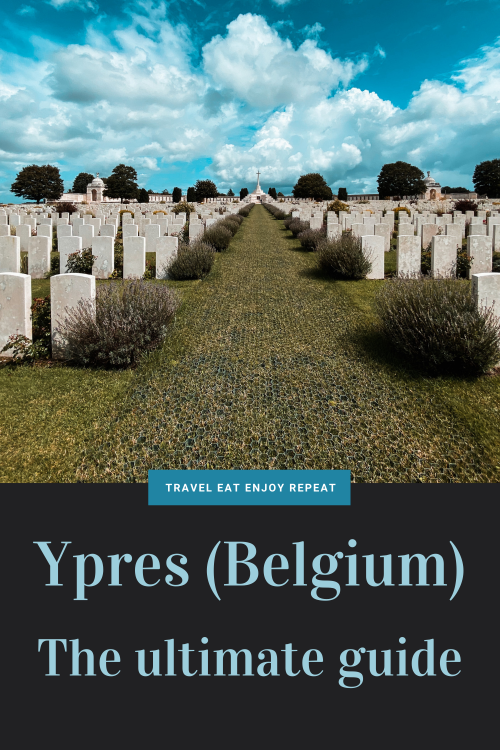