Where to eat in Kiev - Travel Eat Enjoy Repeat

Where to eat in Kiev

In Kiev, you will find a variety of restaurants not only serving Ukrainian but also European food. It is a modern city where you will find coffee places, brewpubs and breakfast places in Soviet-style buildings.

In the past, we always booked a hotel with breakfast when visiting a city. But because hotel breakfasts are almost always the same, it is much more fun to have breakfast in “breakfast” places, as we call them.

Milkbar was on the top of my “breakfast” list when we were visiting Kiev. Because it was located at 30 minutes walking from our hotel, we really were hungry when arriving. When entering Milkbar we were lucky enough to grab the last free table. Everybody speaks very good English and luckily the menu is also available in English. We decided on a big breakfast and a salmon and avocado toast with a poached egg. Their breakfast menu changes, so you may find different options. Both dishes were delicious, but my breakfast could have been a little bit bigger. 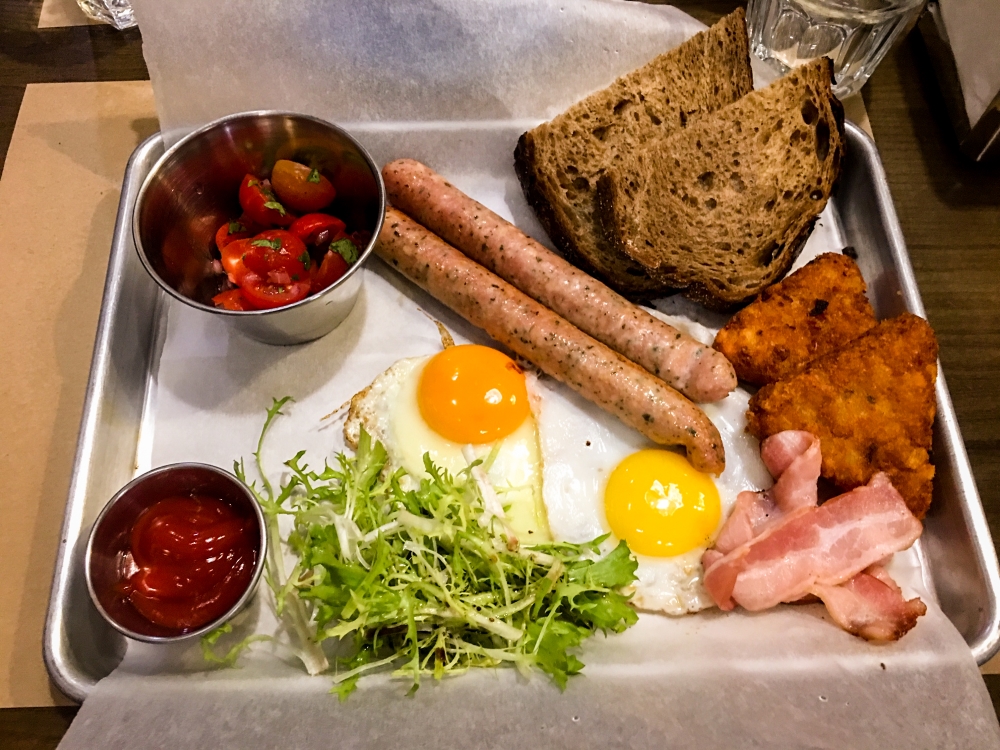 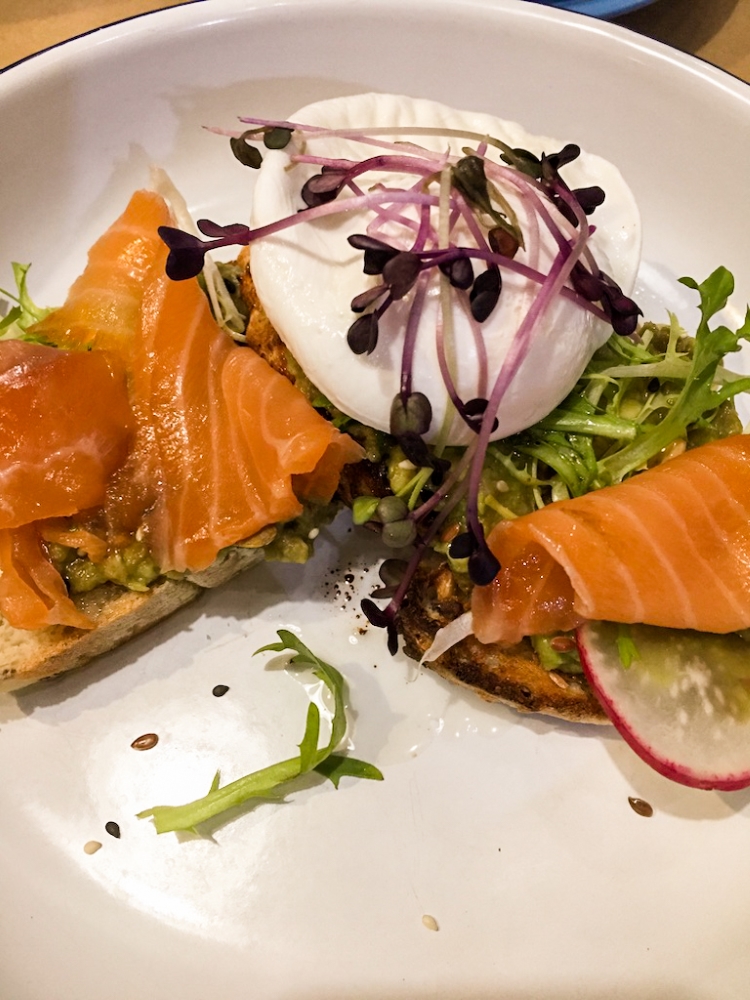 Smorrebrod was closer to our hotel, not far from Independence Square. On a Sunday morning, it was pretty calm, so we thought service would be fast. Unfortunately, this was not the case. But we were not in a hurry, so we didn’t mind. Again, here also, the menu is also available in English. My boyfriend had the poached eggs on brioche with béarnaise sauce while I had the blueberry yoghurt. I should have read the amount next to the dish on the menu and ordered something to go with it. The portion was really small. I would recommend to also order the cinnamon roll or something savoury. 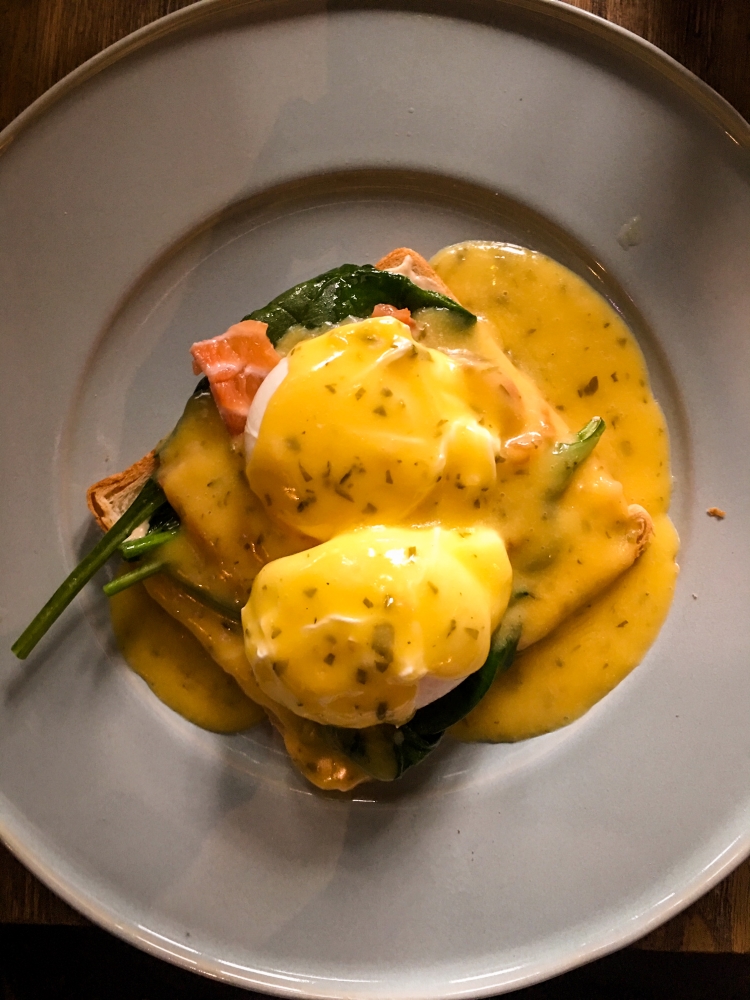 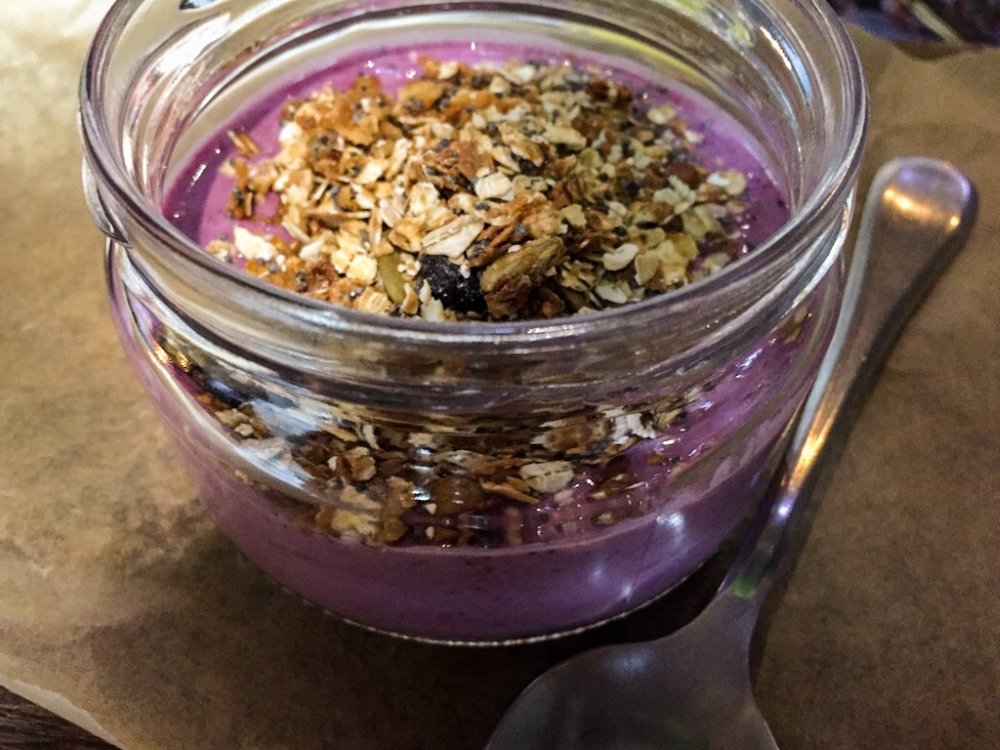 I didn’t look for lunch places in advance, because you never know where you will end (if you are like us and don’t really plan your days ahead). When we were hungry, we just searched Tripadvisor for some options.

Puzata Hata was actually a tip from our free walking tour guide. Puzata Hata is a self-service style restaurant serving traditional Ukrainian dishes like chicken Kiev, Borscht or dumplings. Because everything is written in Ukrainian, we didn’t really know what everything was. We just looked at the food and pointed at things that looked good. Or we just took what the person before us took 😊. Luckily, we aren’t picky eaters. For the 2 of us, we had 7 plates and we only paid about 7 euros. I really recommend coming here if you want to taste Ukrainian food. It is good, fast and cheap. 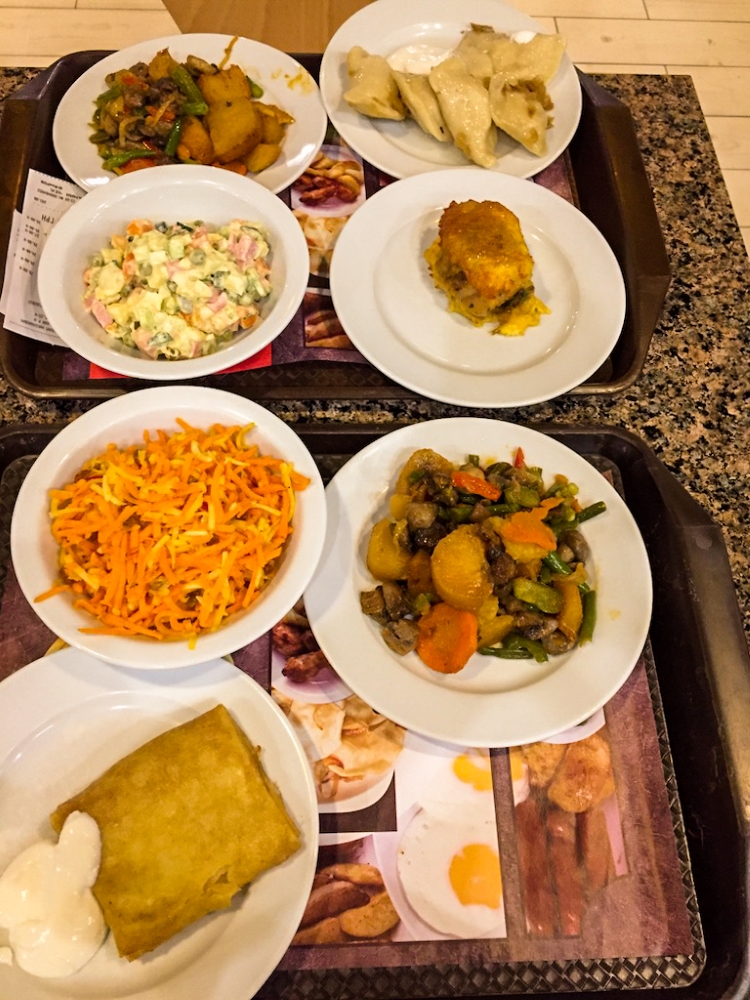 3B Café is located in Podil, a neighbourhood outside of the city centre of Kiev. It is a modern restaurant where they serve beer and burgers. You can choose between a good number of burgers. We were there before lunchtime, so it took a while before the burgers were ready. The burgers itself were big and very tasty but the tiny amount of coleslaw could have been more. The potatoes that were served with the burger were nice and crunchy. 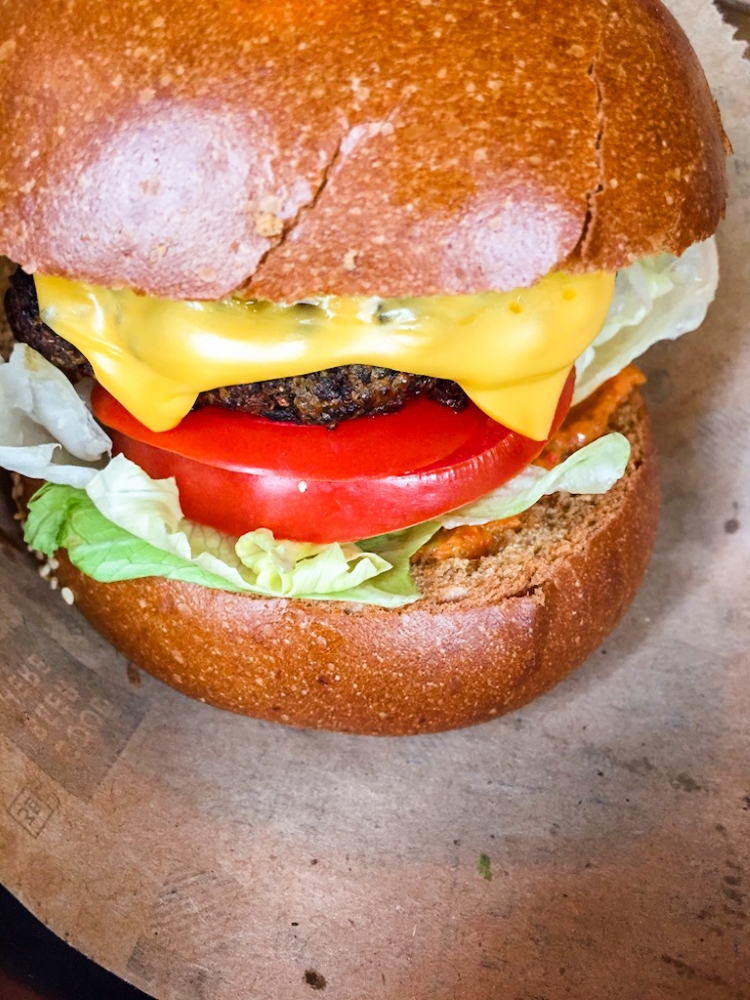 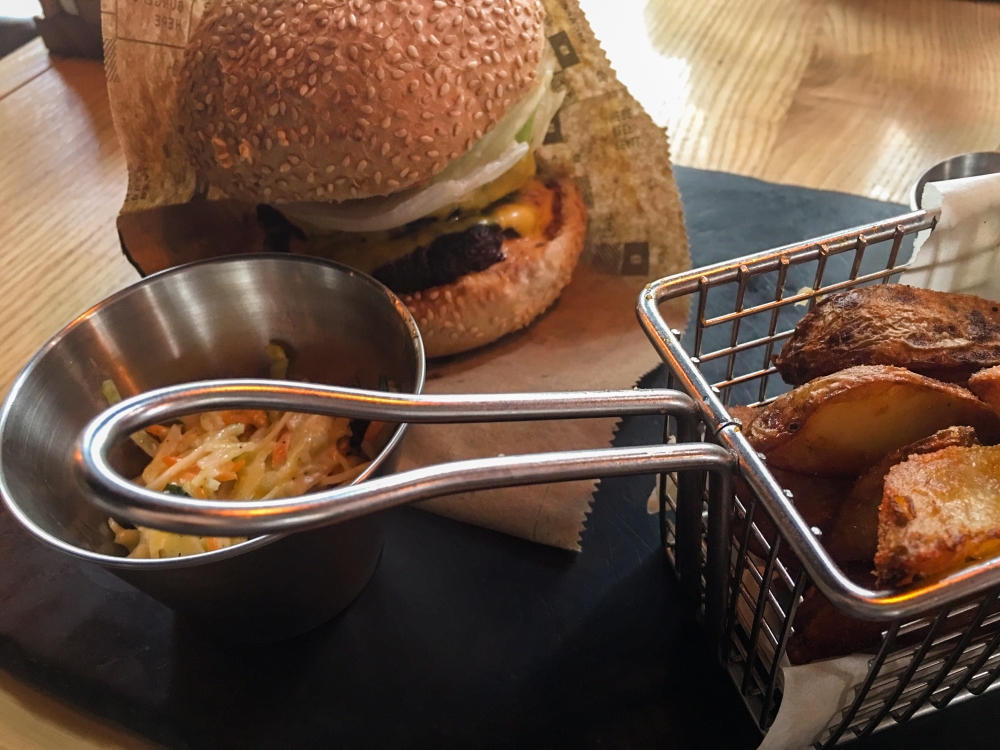 We didn’t make a reservation for dinner while we were in Kiev. And sometimes we were lucky to have a table but sometimes we had to search for a free table (especially on a Saturday evening).

Kanapa was a restaurant I really wanted to visit while in Kiev. They serve traditional Ukrainian dishes with a modern twist. The outside of the restaurant looks shabby but inside it looks stunning. Large tables and sofa’s, dark wood: very classic and cosy. The menu is extensive, so it was hard to choose. While making the first hard food choices, we got some bread and a candle. The candle was actually garlic butter when melted. So you could just dip your bread in it. I started with a pumpkin salad while my boyfriend had the borsch. The latter was served in a large cabbage served with garlic bread; very original. 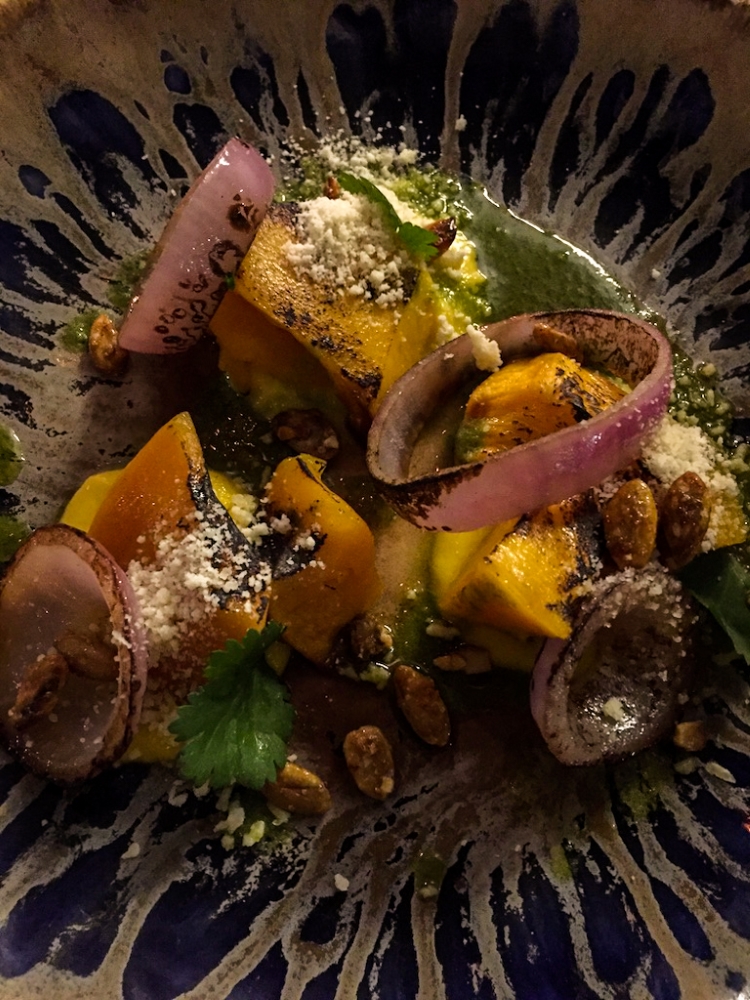 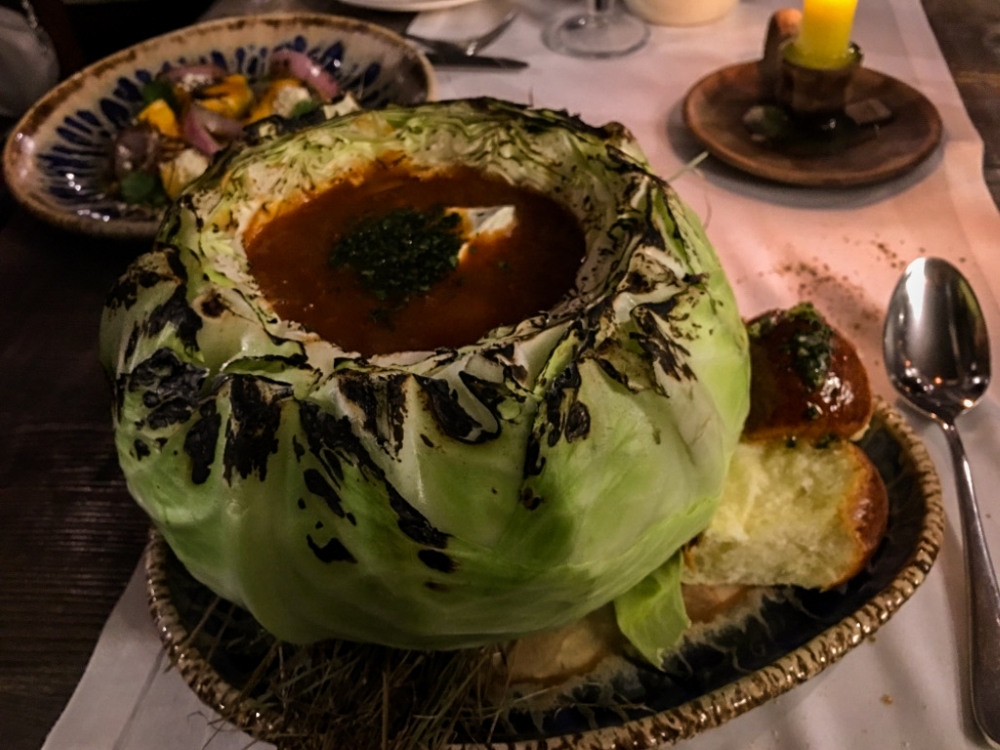 The main course was chicken Kiev and duck breast. Both were delicious, but the portions could have been bigger, especially for the main course. But that leaves more room for dessert of course. 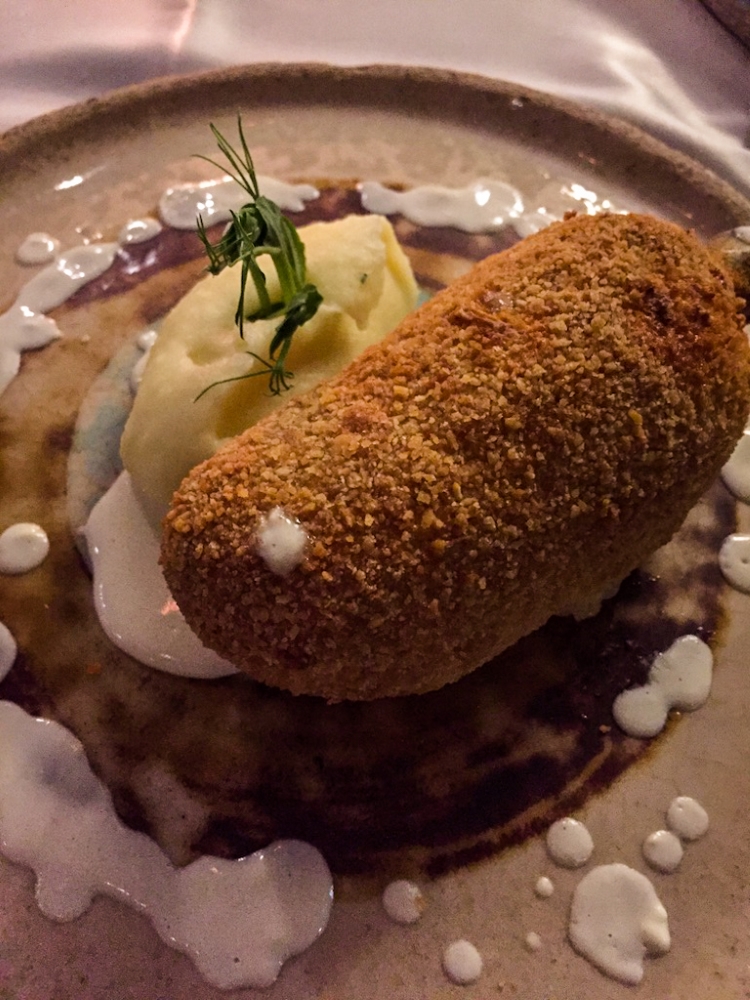 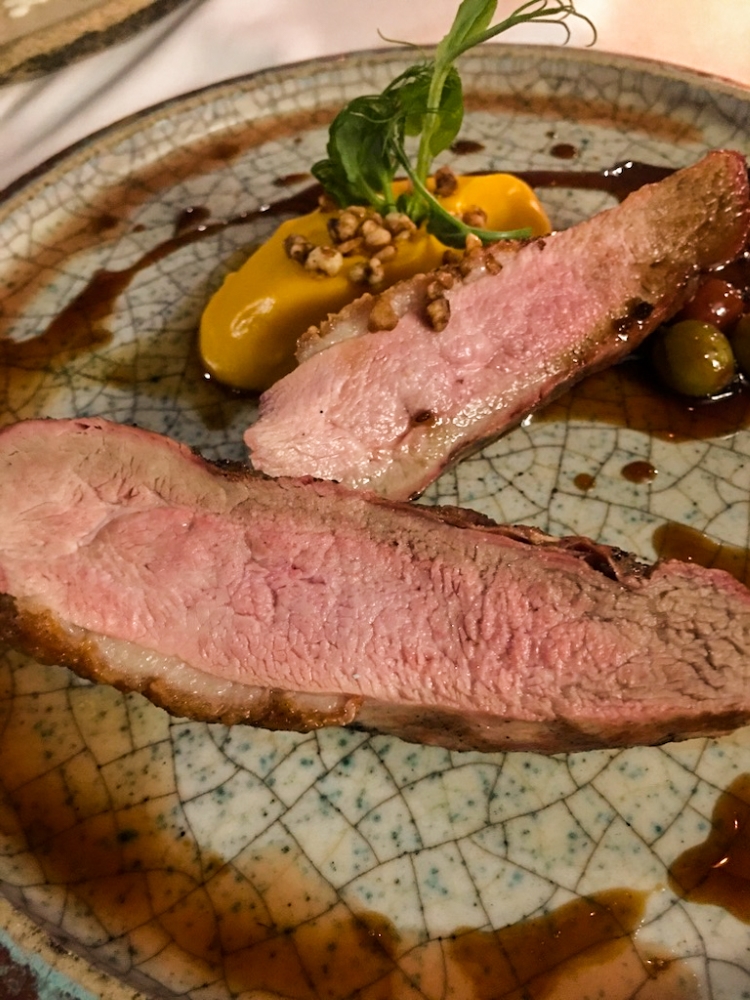 Dessert was varenyky with seasonal berries and rum-tangerine dessert. These were the perfect ending of our first evening in Kiev. I was really surprised by the food and how it is presented. I recommend having dinner here at least once when visiting Kiev. It is the perfect place to discover modern Ukrainian cuisine. 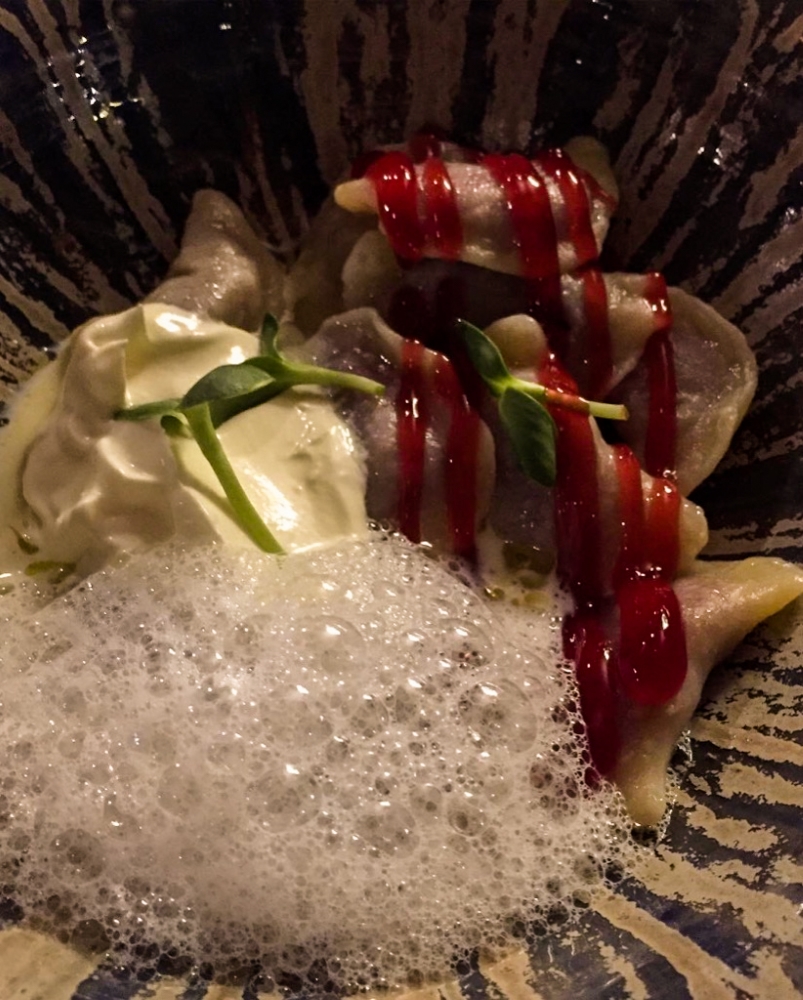 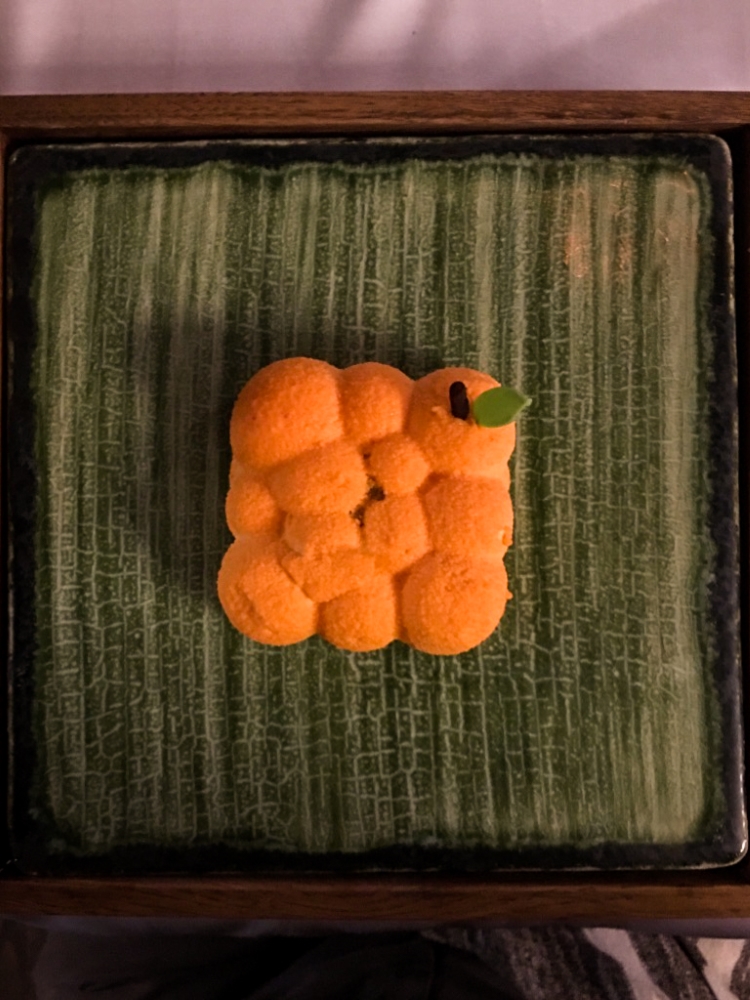 Spotykach was not far from our hotel and looked a little weird from the outside but inside is a very big restaurant. You get a drink at the entrance before going to your table. We ordered some appetizers to go with the yummy bread: dumplings in the colours of the Ukrainian flag and forshmak eclairs. Perfect to share. 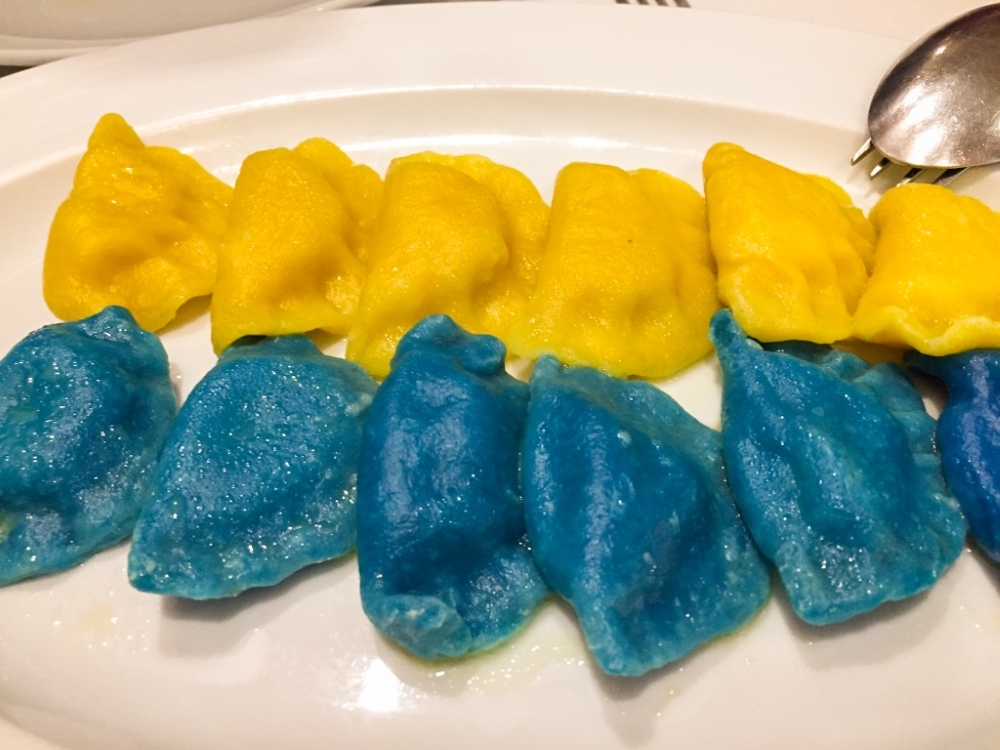 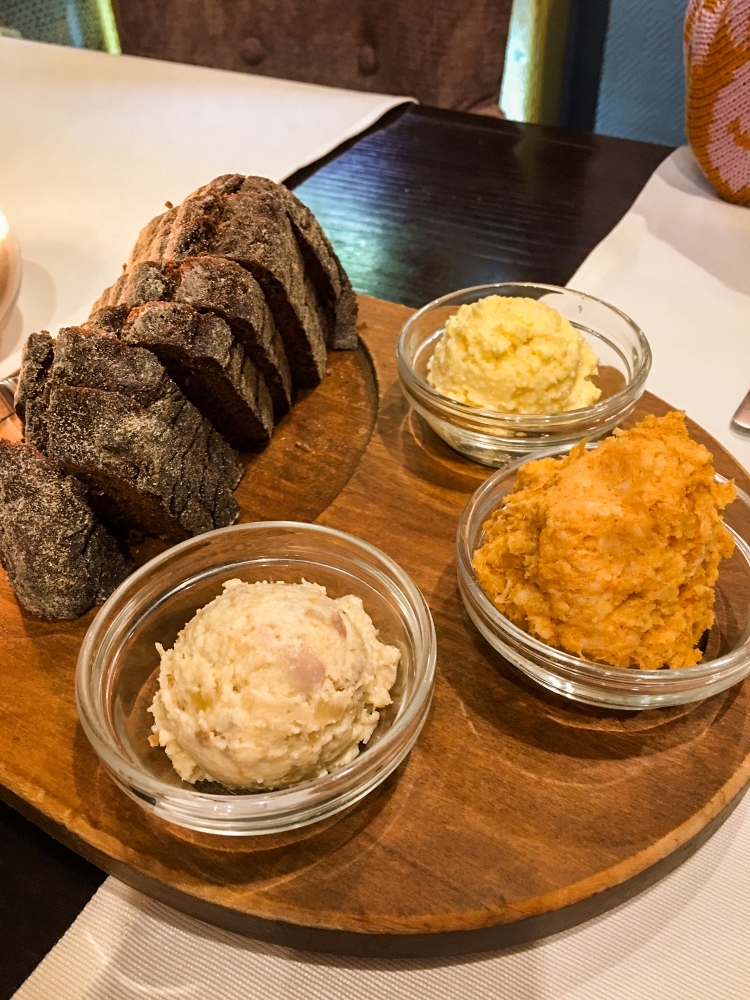 The main courses (veal rack with apple smoke and grilled veal with bacon and grilled vegetables) were presented beautifully and a huge portion. And not to mention, it tasted delicious. 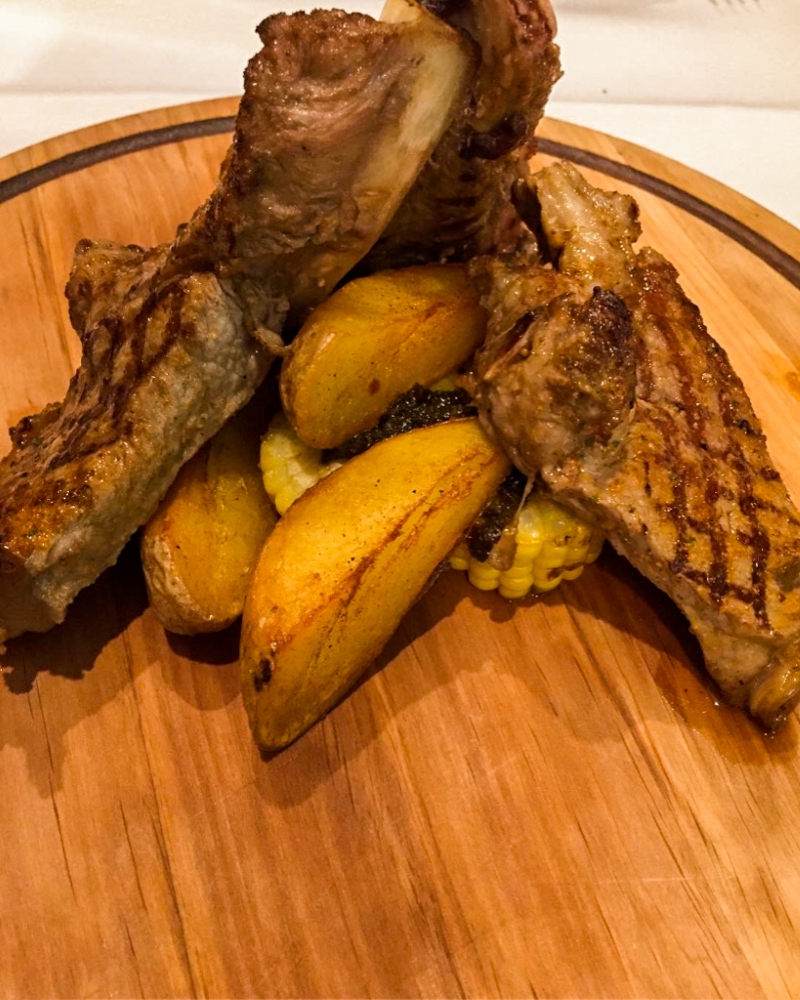 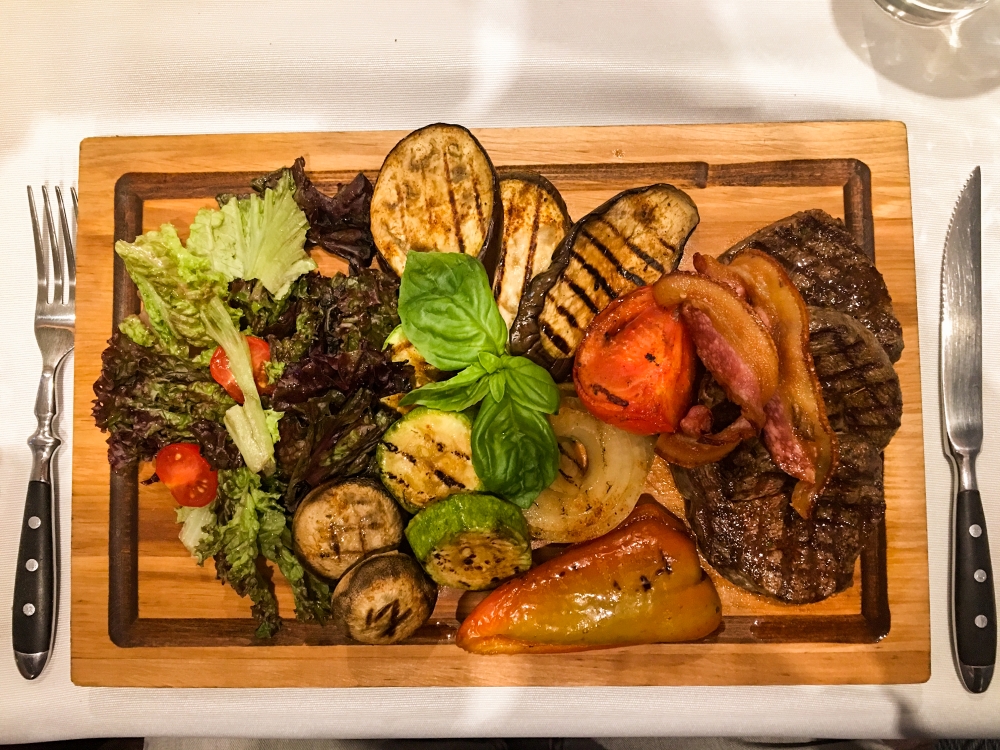 Dessert was Kyiv cake and cheesecake with dried apricot. The last one was a normal portion, but the Kyiv cake would have been enough to feed the both of us: so big. 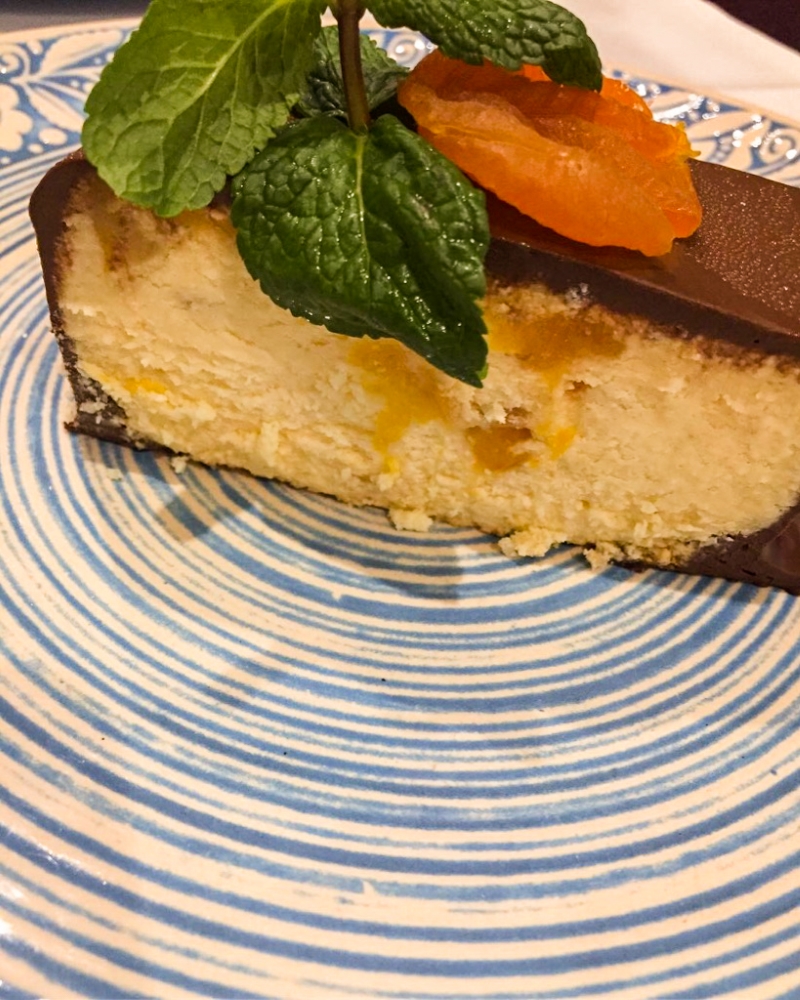 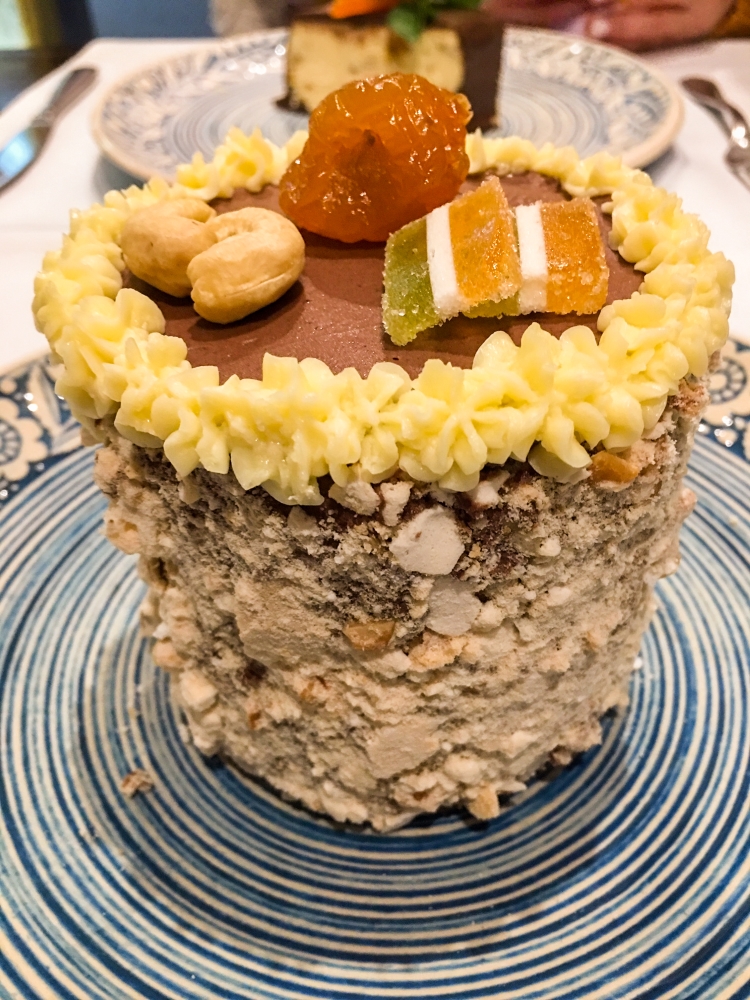 We really enjoyed our meal at Spotykach: very good food and bigger portions than in other restaurants. But there was one big negative point: the bill. We each ordered 2 glasses of wine but the bill mentioned 7 “portions” of wine. When asking for an explanation, we were told that the menu states per 100 ml and that he gave us 250ml the first time and 100 ml the second time. I know for sure I didn’t drink half a bottle of wine, but it was hard to complain afterwards. In order to avoid more discussing, we just paid. They serve very good food but you have to check the bill afterwards.

Very well café was one of the few restaurants where we could have dinner on a Saturday evening without a reservation. I was in the mood for a salad so I got one with brie. My boyfriend ordered duck breast with baked pear, Roquefort and raspberry sauce. The salad had a good piece of cheese on it but not much else besides what was mentioned on the menu. Not an extra tomato or anything. A little bit disappointing. 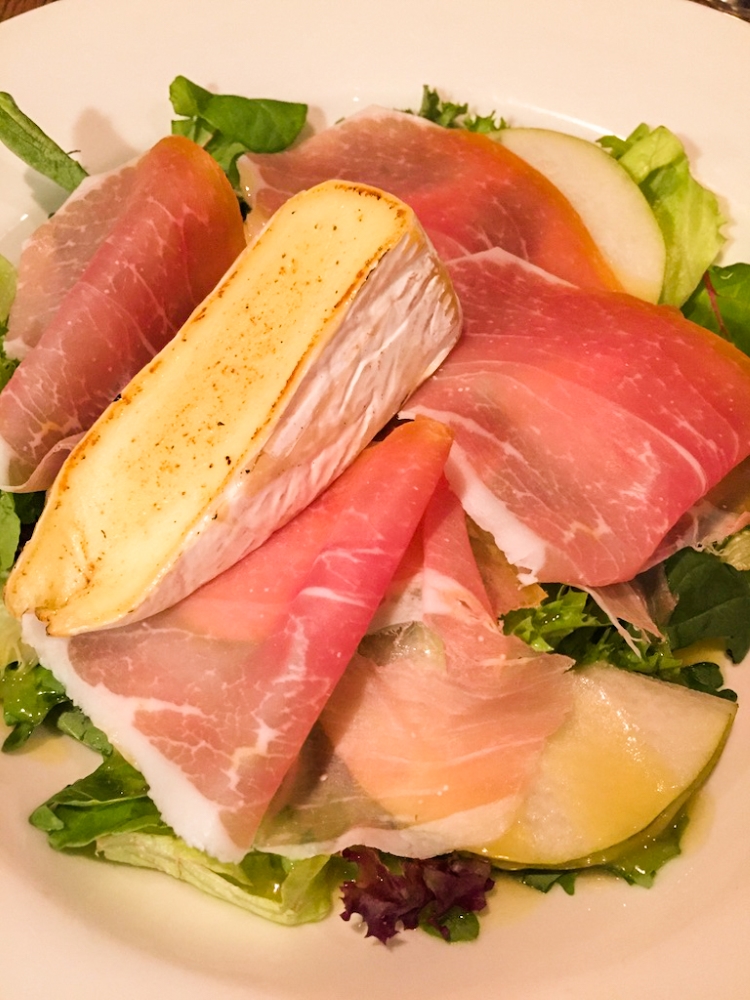 But luckily dessert never disappoints; tiramisu with Kahlua liquor and cheesecake with Buko cheese and blueberry sauce. I just love cheesecake and this one was so delicious, especially with the sour blueberry sauce. That reminds me that I need to make it more often, or just eat it more often. Unfortunately, you don’t find it a lot in Belgium in restaurants. 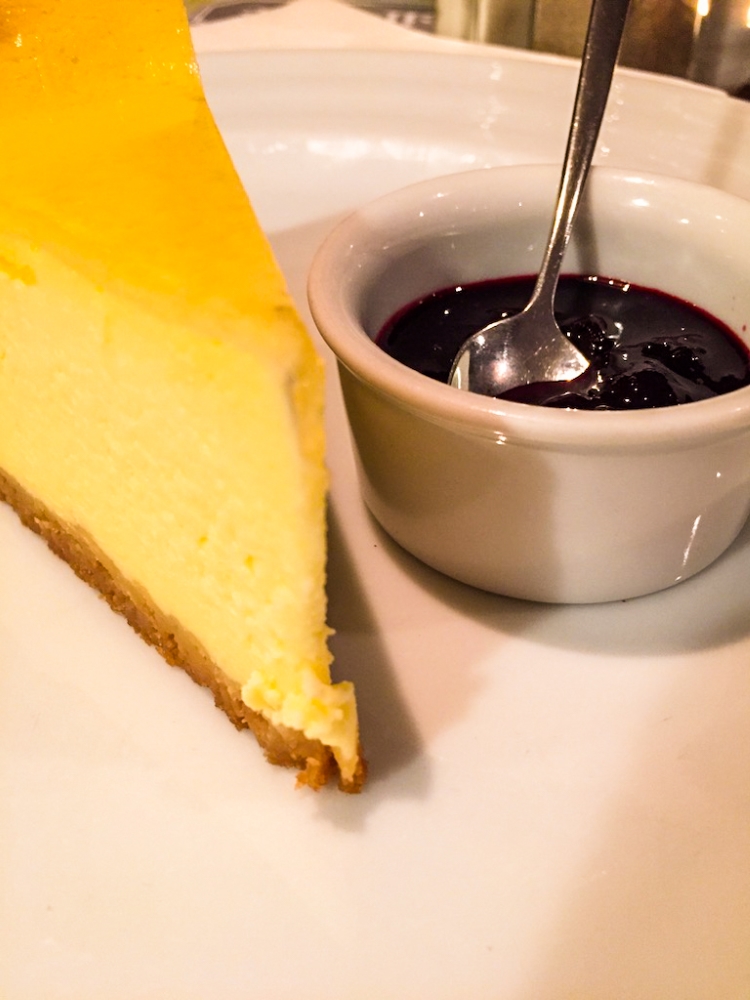 There is a big craft beer scene in Kiev, so we had to try a few bars. Lucky for me, they also have cocktails or wines in these bars.

Just a few minutes from Independence Square, you will find Beer Duma. We only wanted to try the beers, so we were seated at the bar. My boyfriend ordered 4 tasting glasses of their 4 beers. With every beer, he got a little bit of explanation which beer it was. The bartender also really wanted us to taste his new invented cocktail with a splash of cayenne pepper. I loved it 😊 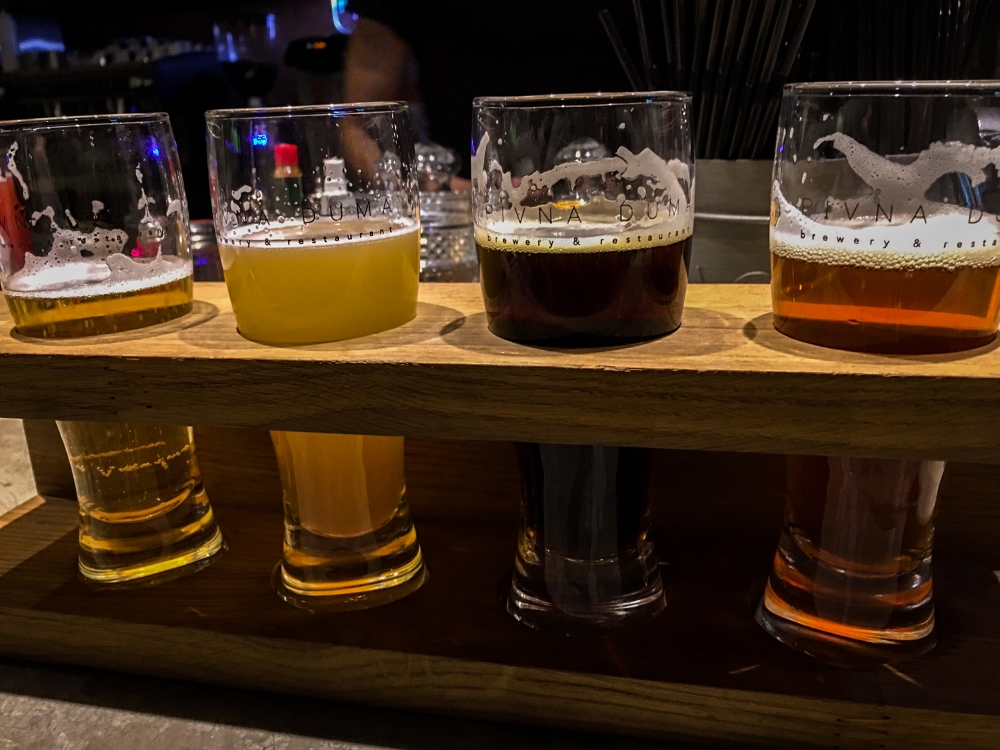 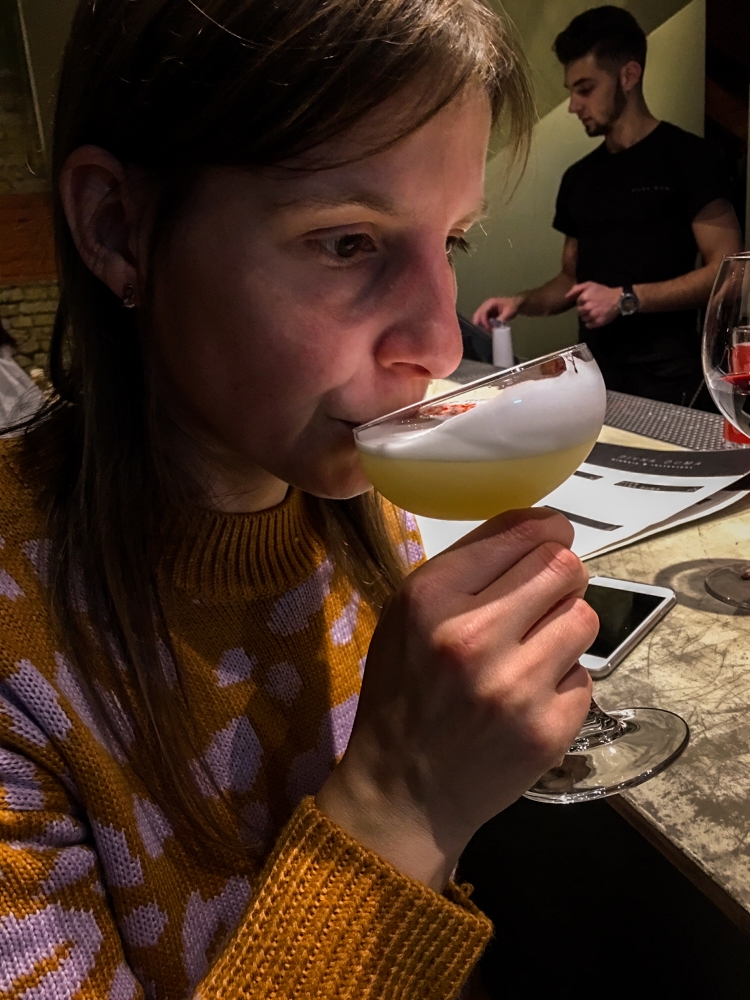 When we were in Podil, we also went to Goose Gastropub. Although the waitress didn’t speak English and also the menu is not available in English, we managed to order our drinks: a glass of red wine for me and a milk stout for my boyfriend. They have a wide variety of beers so you can try a few when you are here. Downstairs they have a nice basement where you can enjoy your drinks or order some food. 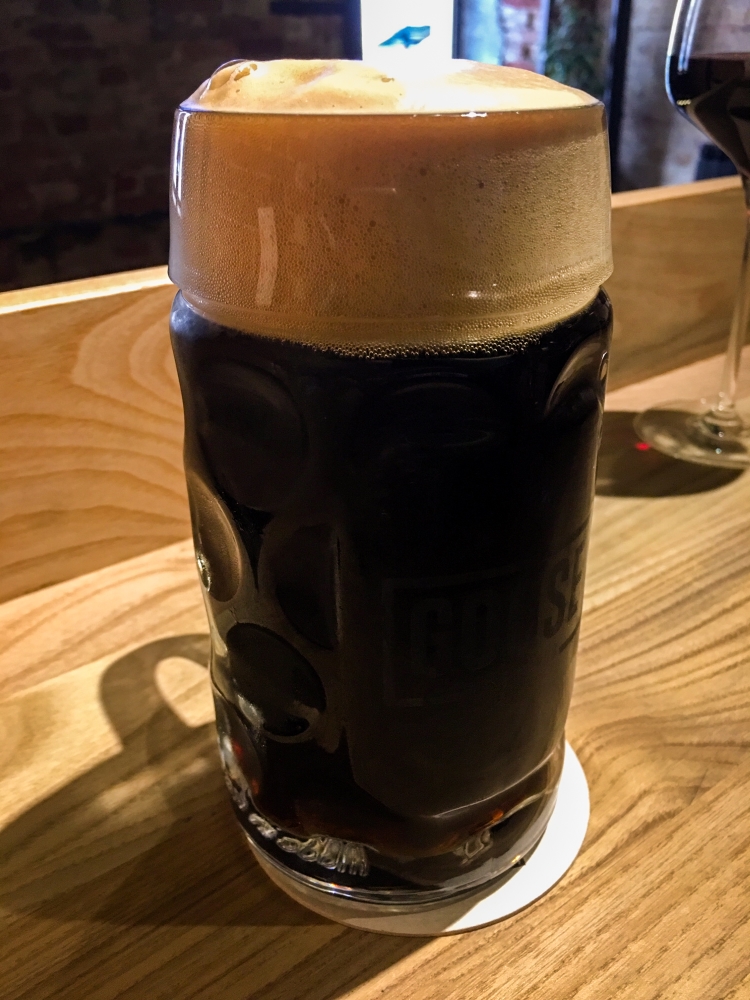 We had some pretty good food when we were in Kiev. Before going to Kiev, we were afraid that it would be difficult to order food because of the language barrier. But luckily, that fear was unfounded. Up front, I really wanted to try chicken Kiev, varenyky and cake Kiev. You will find these dishes in almost every restaurant. It shows that they are very proud of their food and heritage. If you are more courageous than us, you should try the more special things that you can find in some restaurants like lamb tongue, veal brain or bovine testicles. 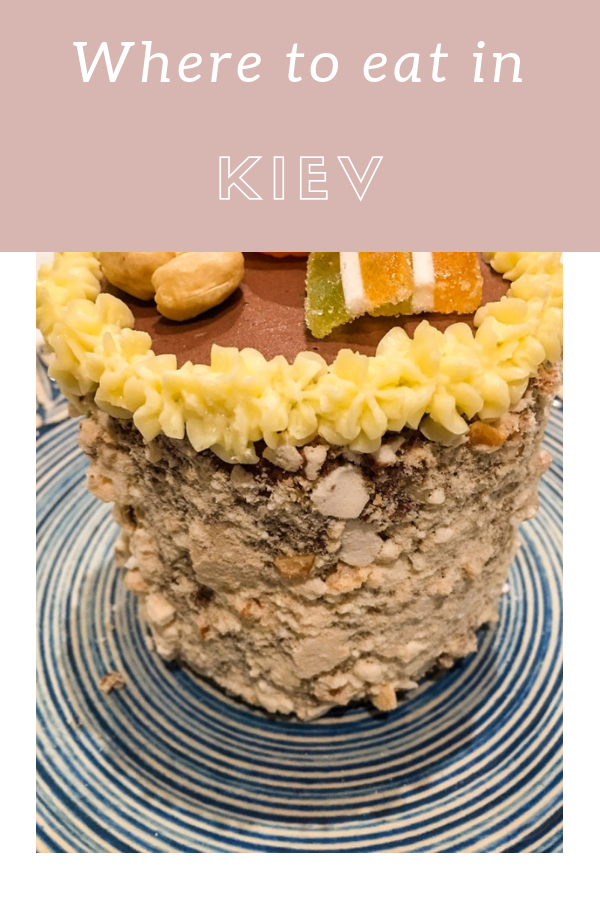