36 hours in Amsterdam – food and drinks

Although we are living in Belgium, we don’t visit The Netherlands, and particularly Amsterdam a lot. In fact, I have lived in The Netherlands (Eindhoven) for almost 4 years and I have visited Amsterdam twice. So when we were looking for an interesting city not far from Belgium, we quickly decided on this beautiful historical city.

We spend 1.5 days exploring the city with a focus on food, drinks, and just having a good time.

During our trip, we stayed at XO Hotels Park West outside of the city center. This hotel was perfectly located to explore the city. 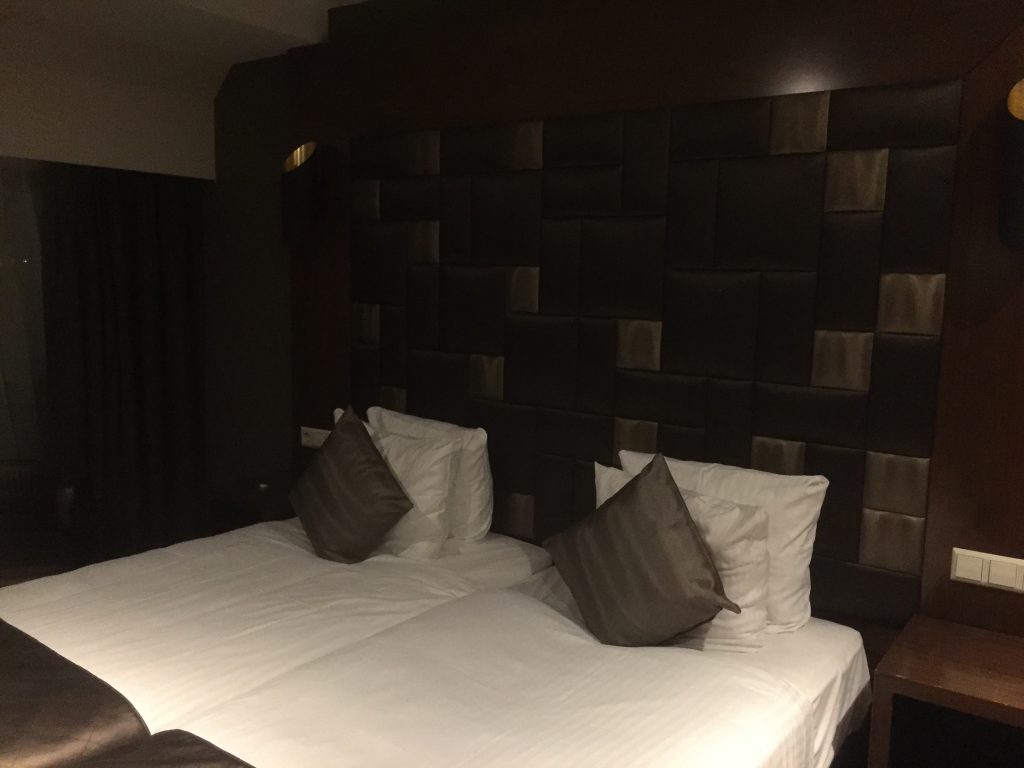 The most important part of the day is breakfast. We loved the huge amount of so-called breakfast cafés in Amsterdam, we are not used to that in Belgium. I love breakfast, and I love to eat more than just normal bread or croissants. You have to try as many as possible but we only had 2 days. It was a difficult choice to make but we decided to have breakfast at The Breakfast Club one day and at Bakers & Roasters the next day. These places are not in the city center, so there are not only tourists that will enjoy their breakfast here.

We ended up having Breakfast at The Breakfast Club in the Bellamystraat. We were the first one to enter but we weren’t alone very long. After about 20 minutes, the place was packed. We had some homemade granola with low-fat yogurt and a London breakfast (fried eggs, sausage, bacon, mushrooms, tomatoes, beans, and toast). I first wanted to combine the granola with an avocado toast but the waiter was so friendly to point out the portion sizes :). So only stuck with the granola. Everything was soo good and fresh. And indeed, the granola was more than enough to fill my belly. 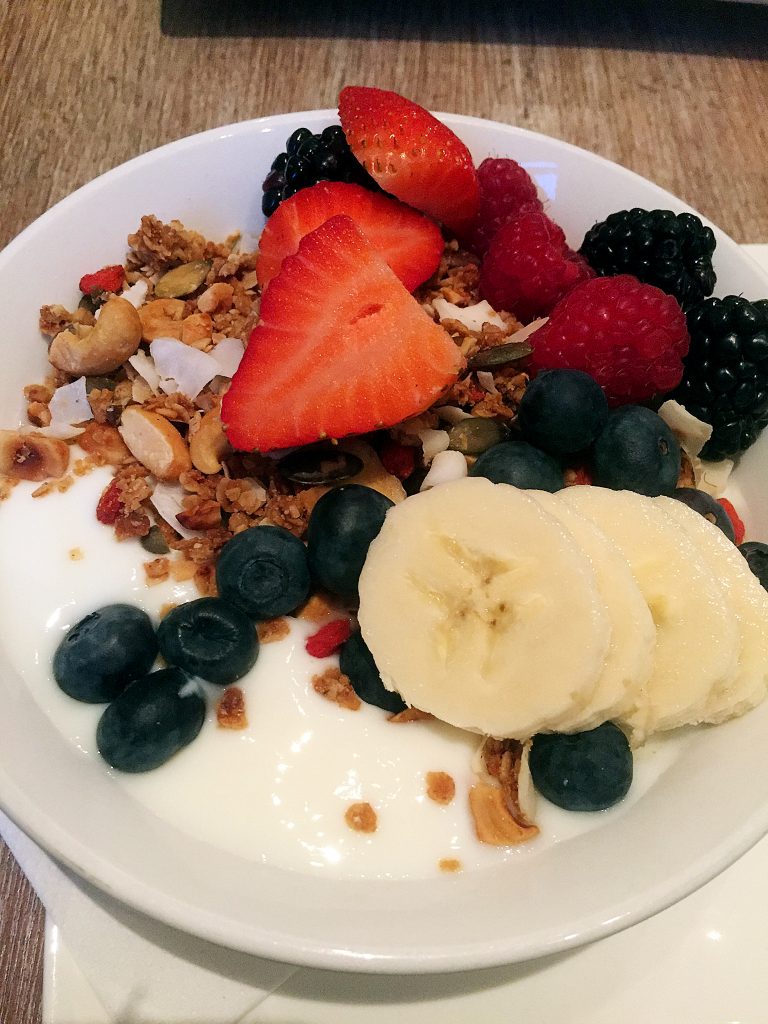 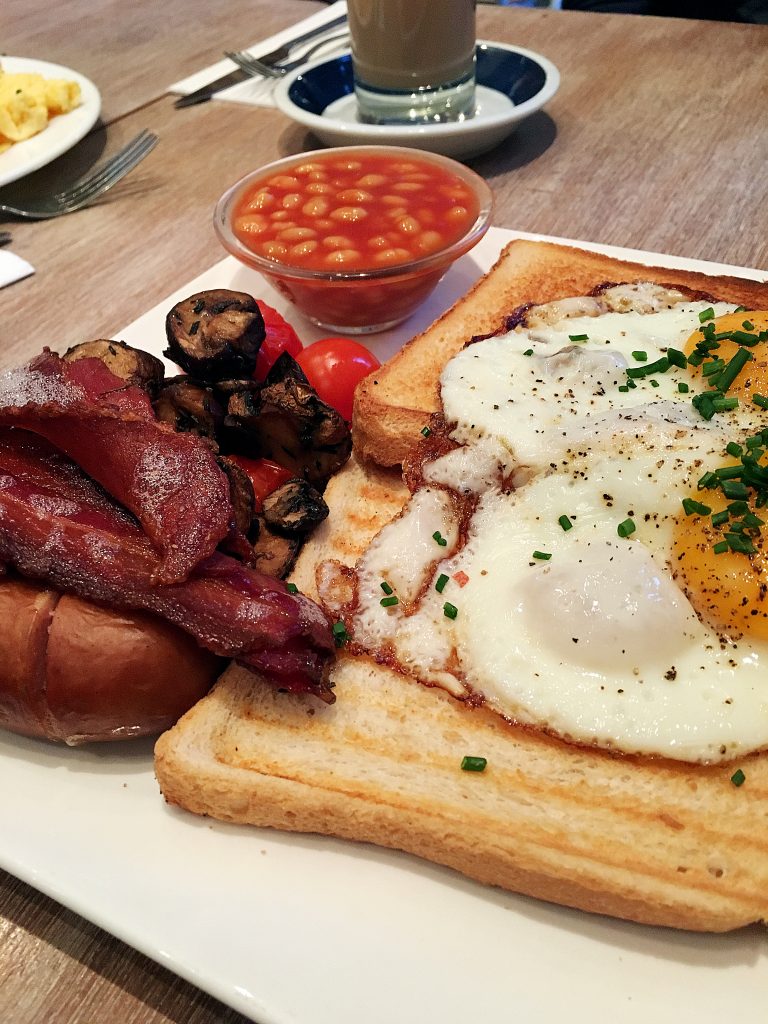 On a Sunday morning, we were lucky to grab one of the last tables at this breakfast place. They immediately brought the menu to our table and some glasses of water. Again, the choices you have here all look so delicious. Because it was cold outside, it was the perfect weather for some porridge: banoffee porridge (creamy oats with salted date caramel sauce, gingernut biscuit crumb, roasted pistachio, fresh cut banana and dark chocolate chips). My mouth’s watering just reading that description. We also had de B&R special: 2 scrambled eggs on toast with bacon and a mini stack of pancakes. The oats were as yummy as they sounded. And the pancakes were a lot fluffier than the ones we had a day earlier (more on that later). 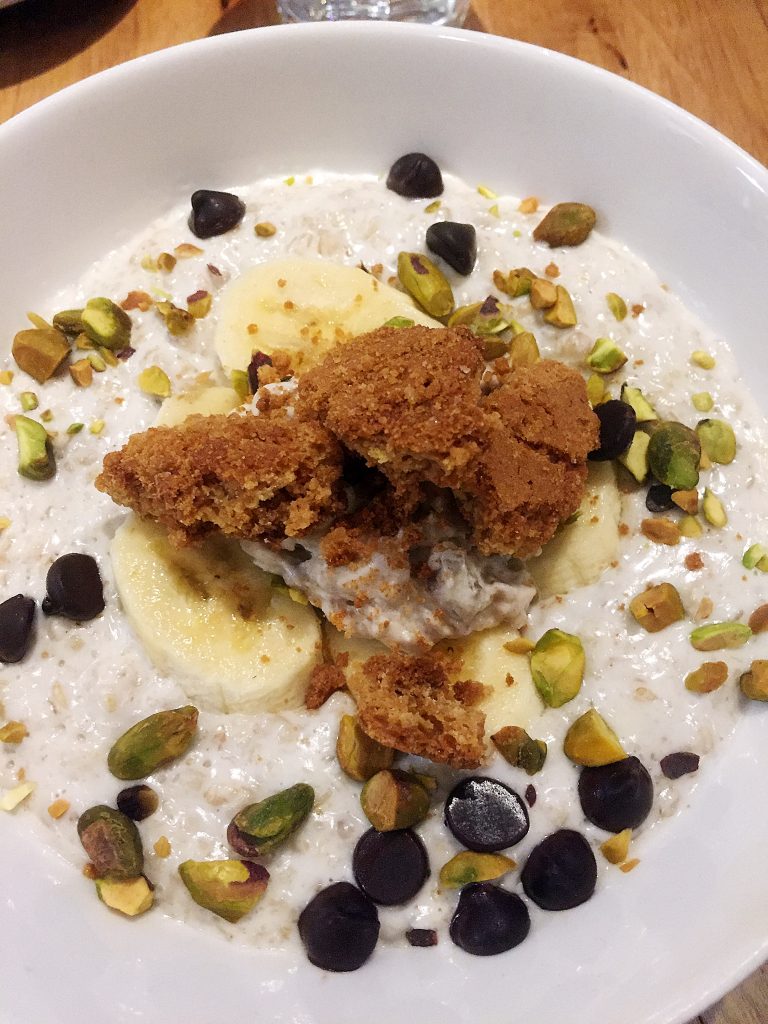 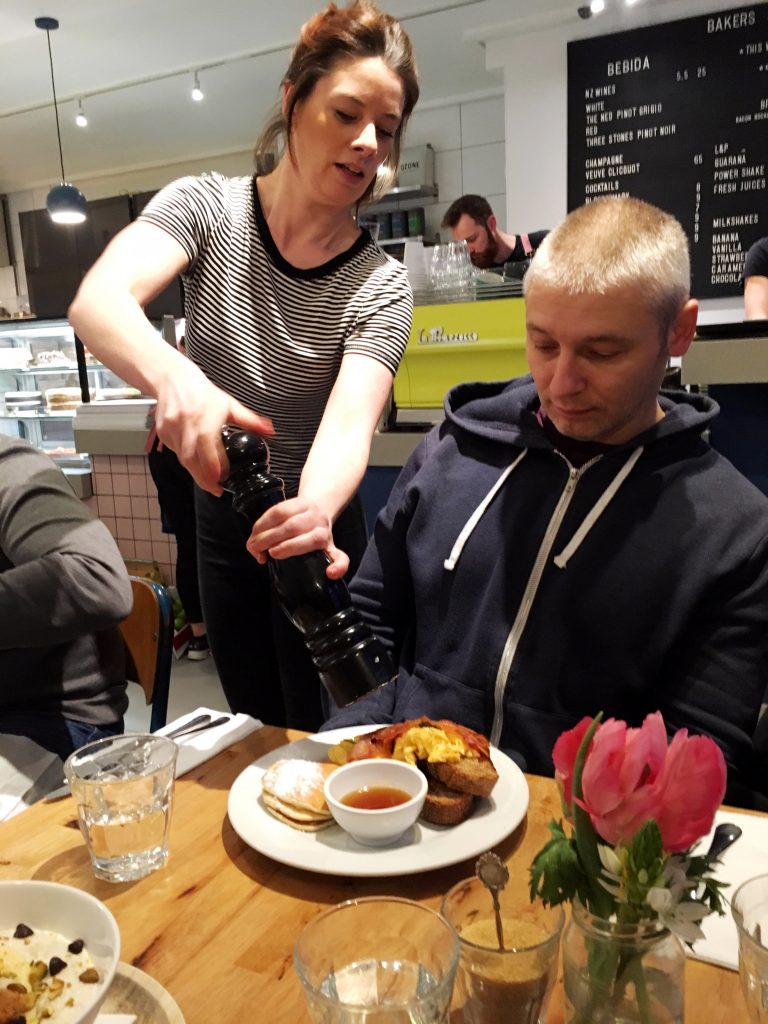 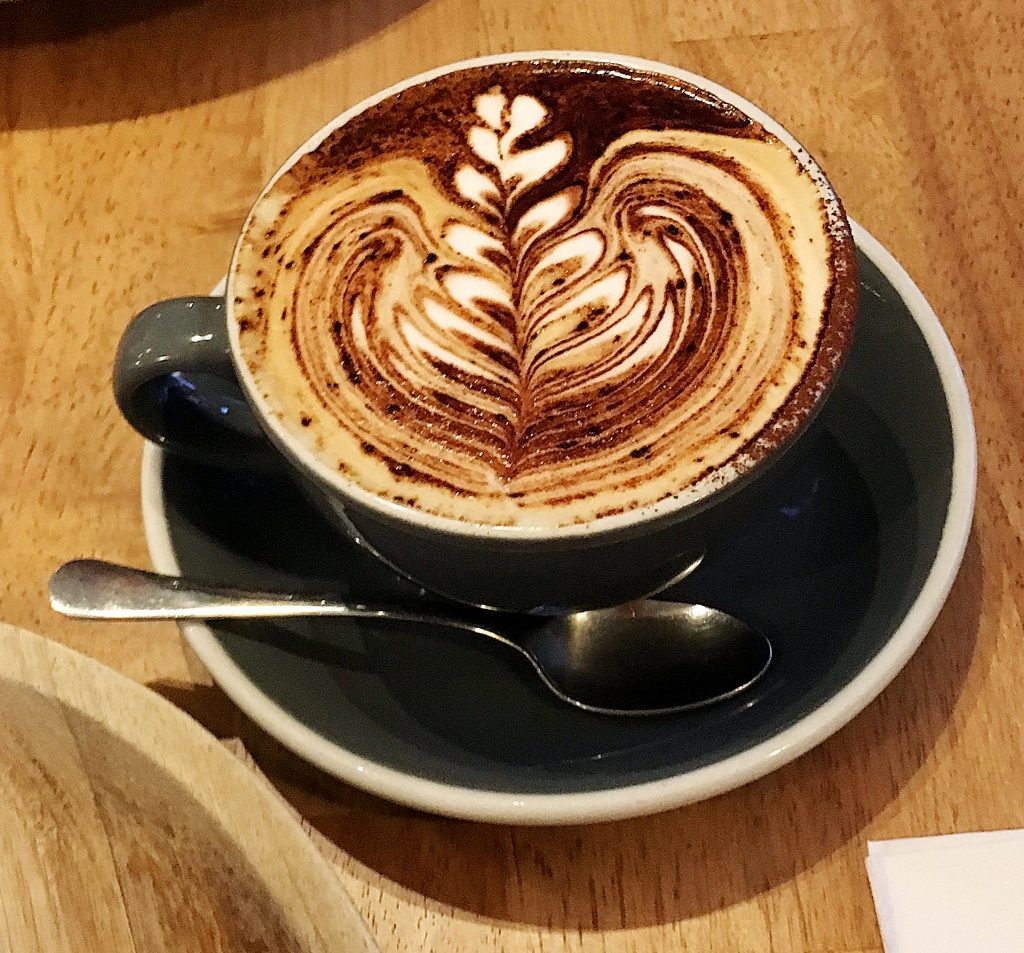 We wanted a light lunch, so our first choice was bagels and beans. But we weren’t the only ones with that idea. Instead, we ended up at Café Restaurant Morlang at the Keizersgracht. I was craving something light, so I ordered the salad with roasted avocado and goat bag yogurt with some bread. We also ordered a carpaccio sandwich. The salad was very tasting but the portion size was a huge disappointment. Yes, I ordered the small one, but if I didn’t ask for some bread, it would have been a very poor meal. I was expecting much more for 12 euro. It is not like vegetables are expensive. Overall a very friendly service but stick with ordering sandwiches and not the salads. 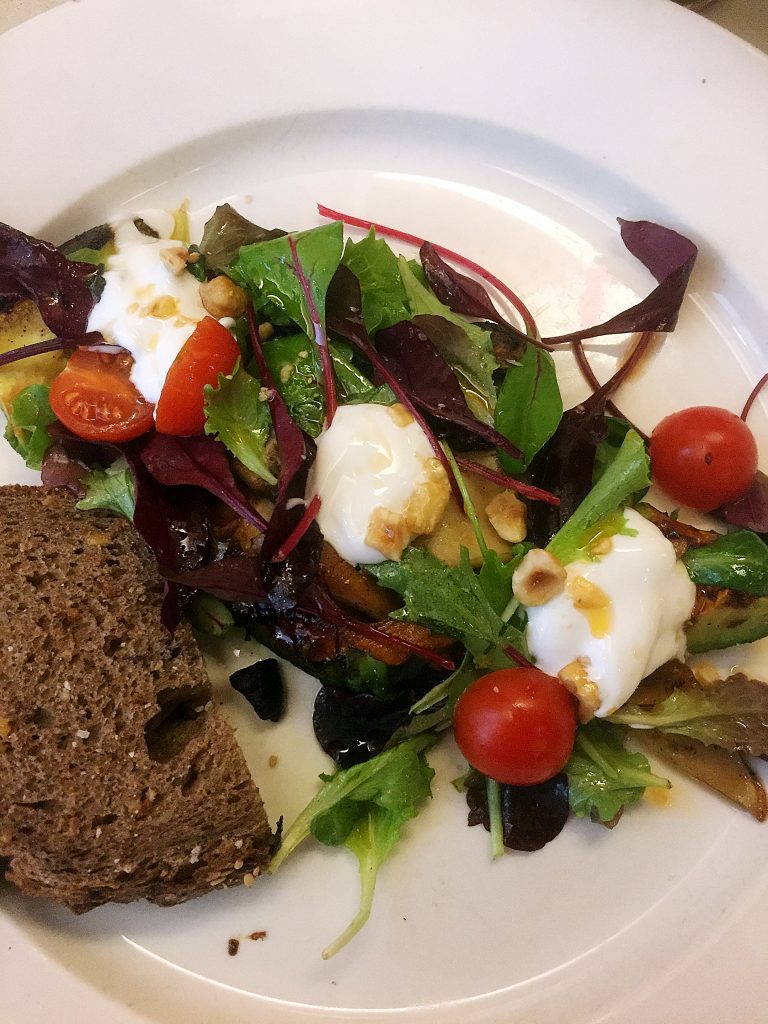 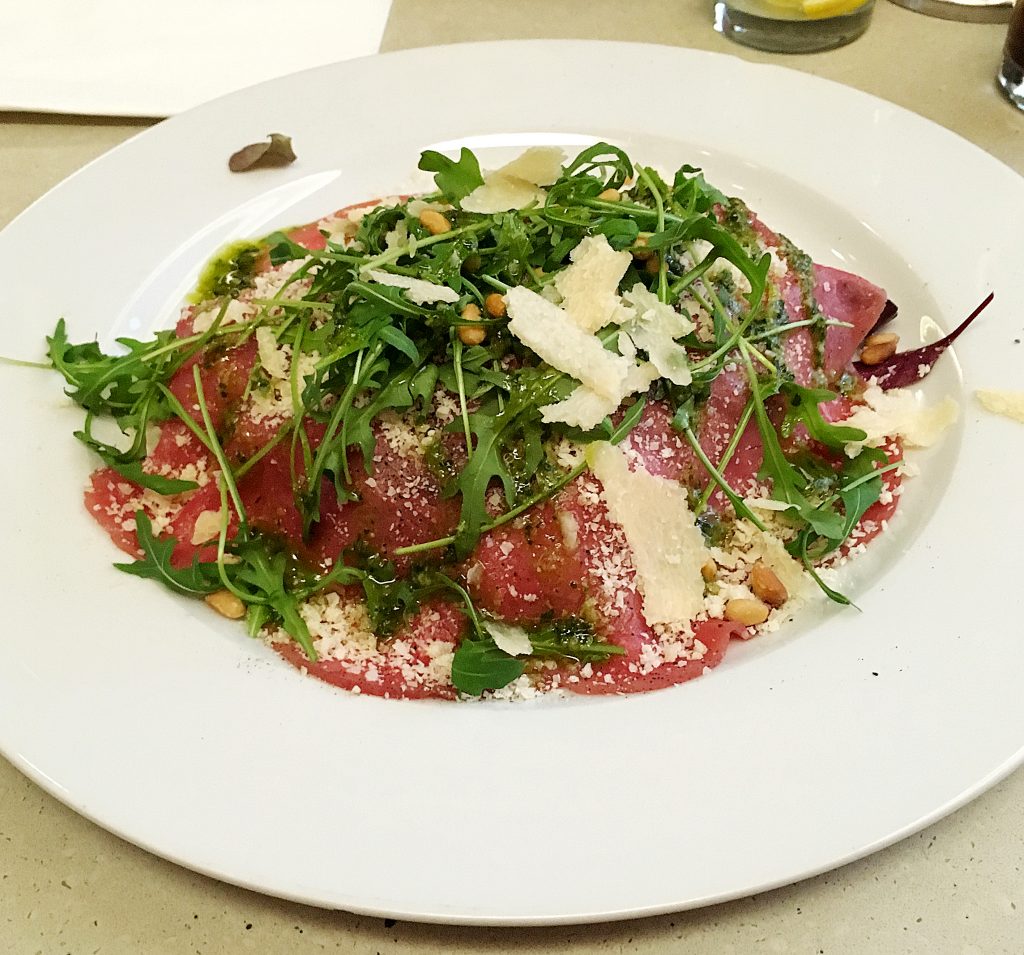 We have a small tradition when we are in The Netherlands: eat sushi. We don’t have a lot of restaurants in Belgium that offer all-you-can-eat sushi so when we have the chance to have sushi, we grab it. Our friends hadn’t tried this concept before, so we were all too happy to introduce them. We had dinner at Sumo near the Leidseplein in the center of Amsterdam. The concept is simple: you can eat as much sushi and other dishes on their menu for 3 hours. You place your order on a tablet and they bring everything to your table. Compared to other all-you-can-eat sushi restaurants, there was less variety in sushi but more ‘other’ dishes like salads, meats, … . We had a very tasty evening 🙂 although the service could do with some more smiles. (Sorry not a lot of pictures, we were too fast eating everything). 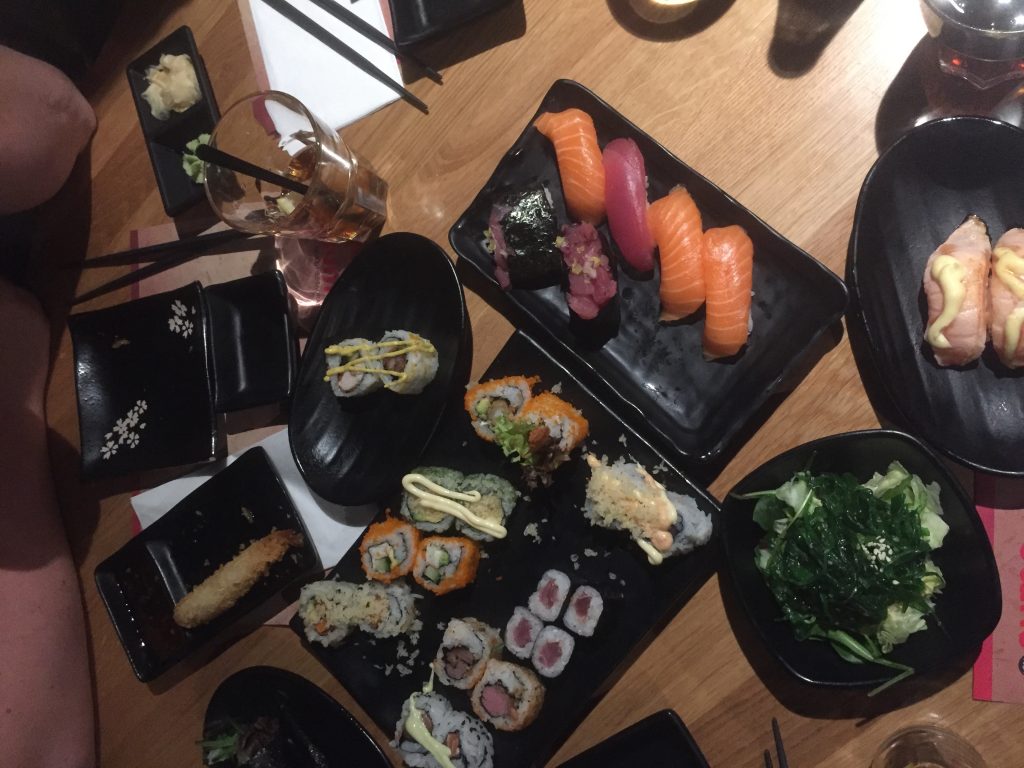 Is there anything that is more sociable than a nice glass of wine or cava? In a search for a nice wine bar, we ended up with Bubbles and Wines, not far from the Dam Square. They have a huge selection of wines and champagnes, not only by the bottle but also by the glass. We had some glasses of cava (we, Belgians just love cava. We are the second largest import country of cava in the world) and were also offered some water. Maybe it is strange to mention this, but getting ‘free’ water isn’t as normal as it seems. It would, however, be nice to also get some nuts or other small things to nibble on. 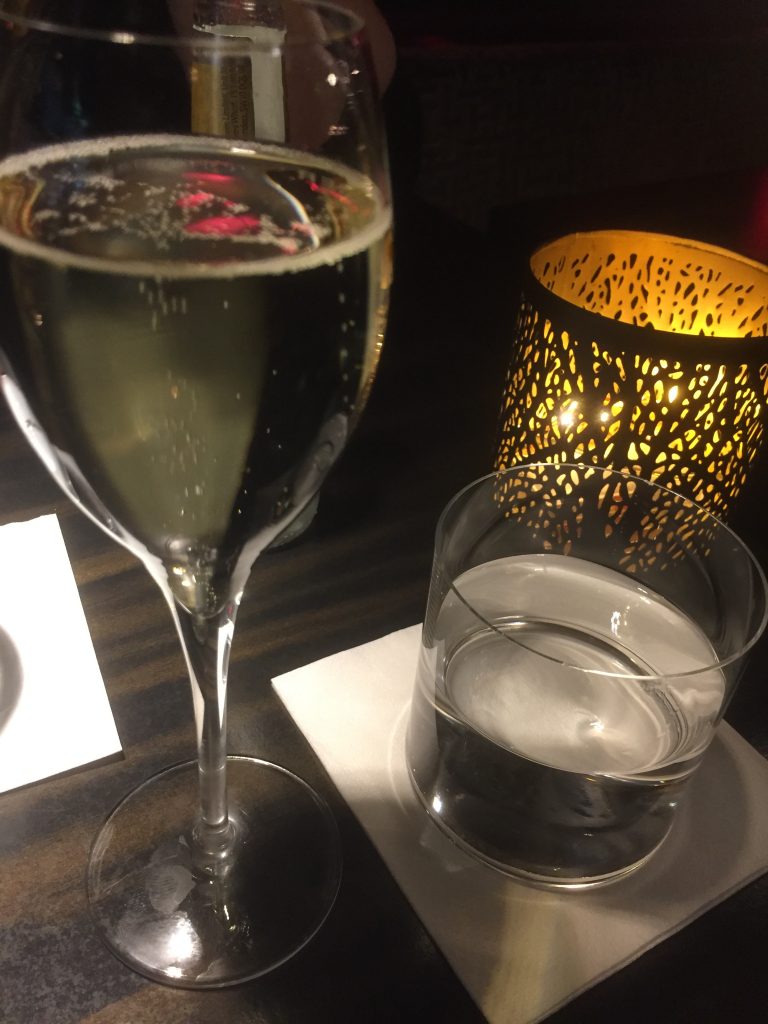 There are a few food specialties, the Dutch are famous for: croquettes, pancakes, and stroopwafels. So it is without a doubt that we have to try them all.

The best stroopwafels, are the ones that are made fresh. We had one at the Albert Cuyp market. Delicious rich cinnamon caramel-like syrup between baked dough is so good when it is still warm. But don’t let that stop you from also buying some to take back home with you. Don’t let the size fool you, they are not a light snack. 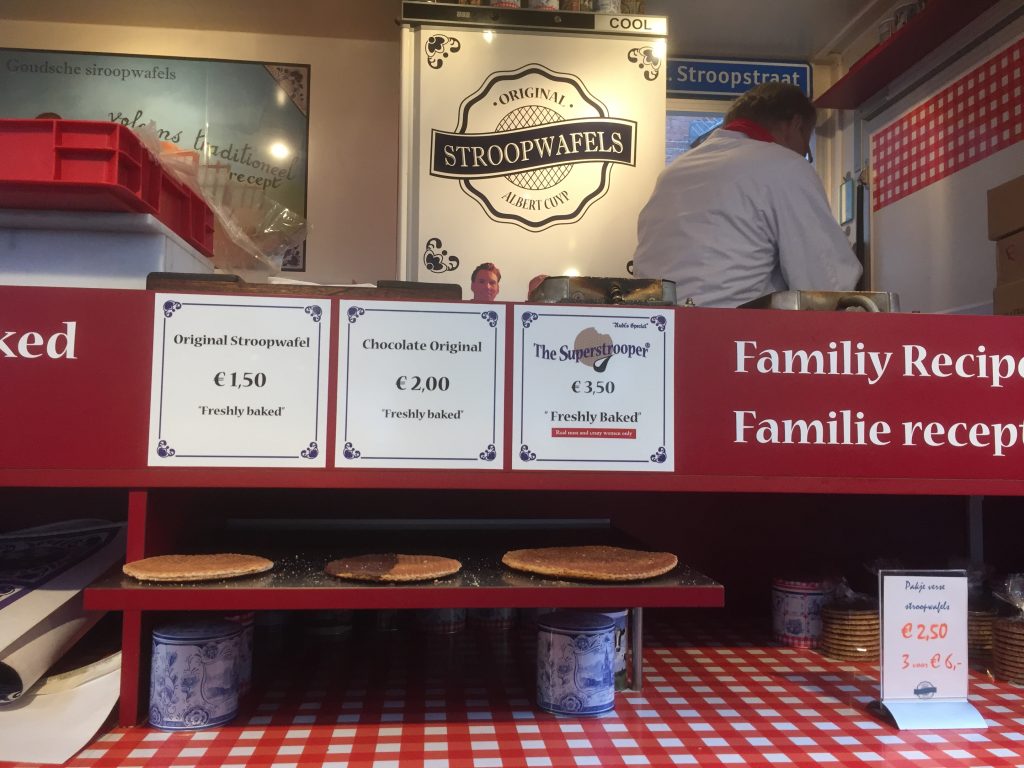 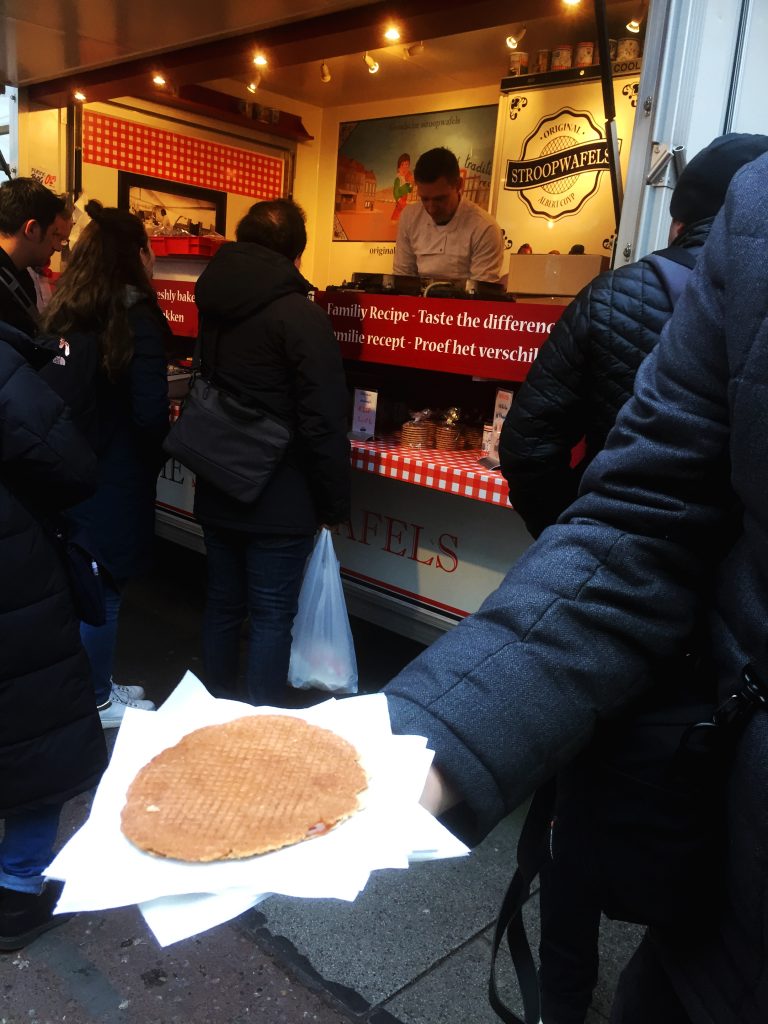 Next up are croquettes, preferably filled with beef or veal. My favorite ones are the spicy ones. At restaurants, they are often served with bread (broodje kroket) and mustard. The most famous way is to buy them ‘uit de muur’, which literally translates ‘from the wall’. At Febo, they are put in small cubes and after putting some money in it (like in a vending machine), you can open the door to enjoy your croquette. 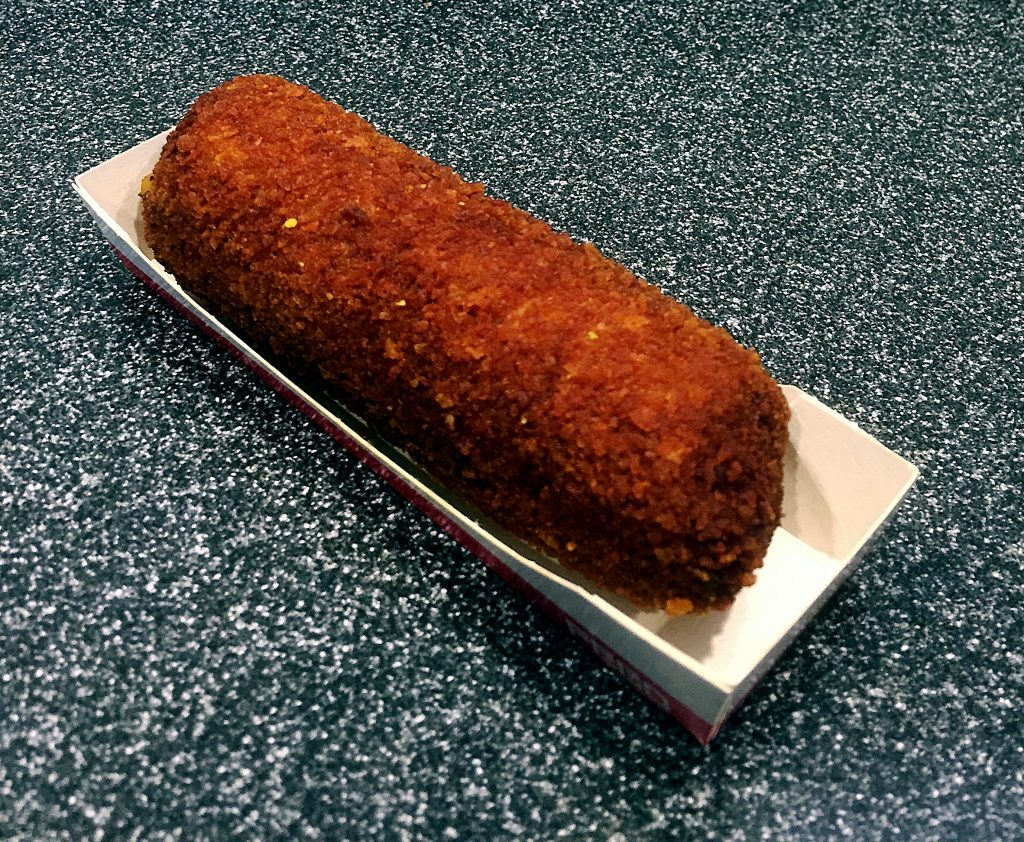 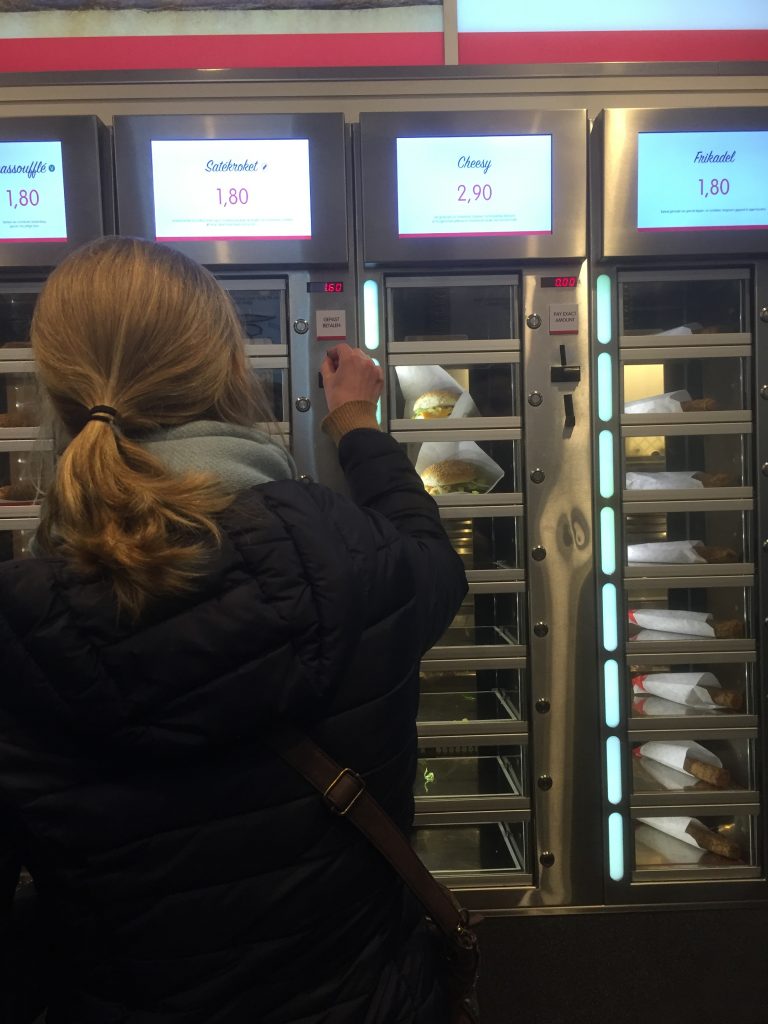 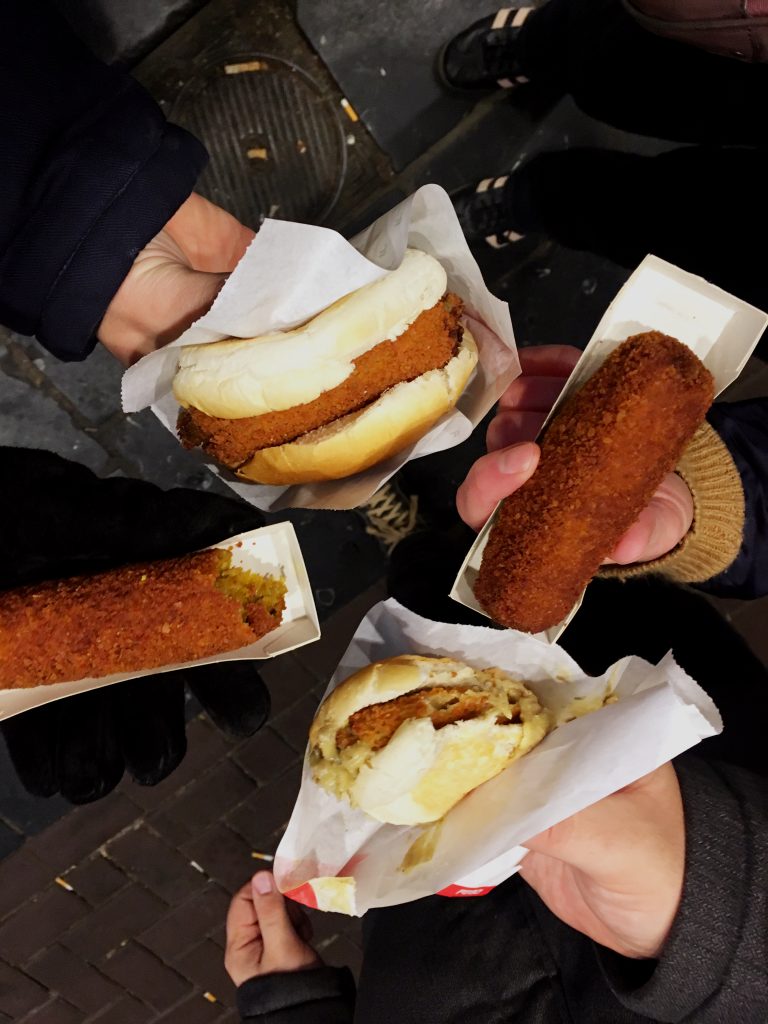 After a tip from a friend, we had some pancakes at Pancakes Amsterdam. But instead of ordering some savory ones or poffertjes, the ones where the Dutch are most famous for, we ordered American style pancakes with syrup. That was not such a very good idea. The pancakes were very heavy and not fluffy enough. Two pancakes would have been more than enough. There wasn’t enough syrup for all the pancakes that you got, but luckily there is some on the tables. The service is pretty fast (which comes in handy if you have to be somewhere at a certain time, like the Anne Frank House, which is next door). If you are craving for pancakes, I would not order the American style pancakes but the normal crêpes or even better, poffertjes with some butter and sugar. 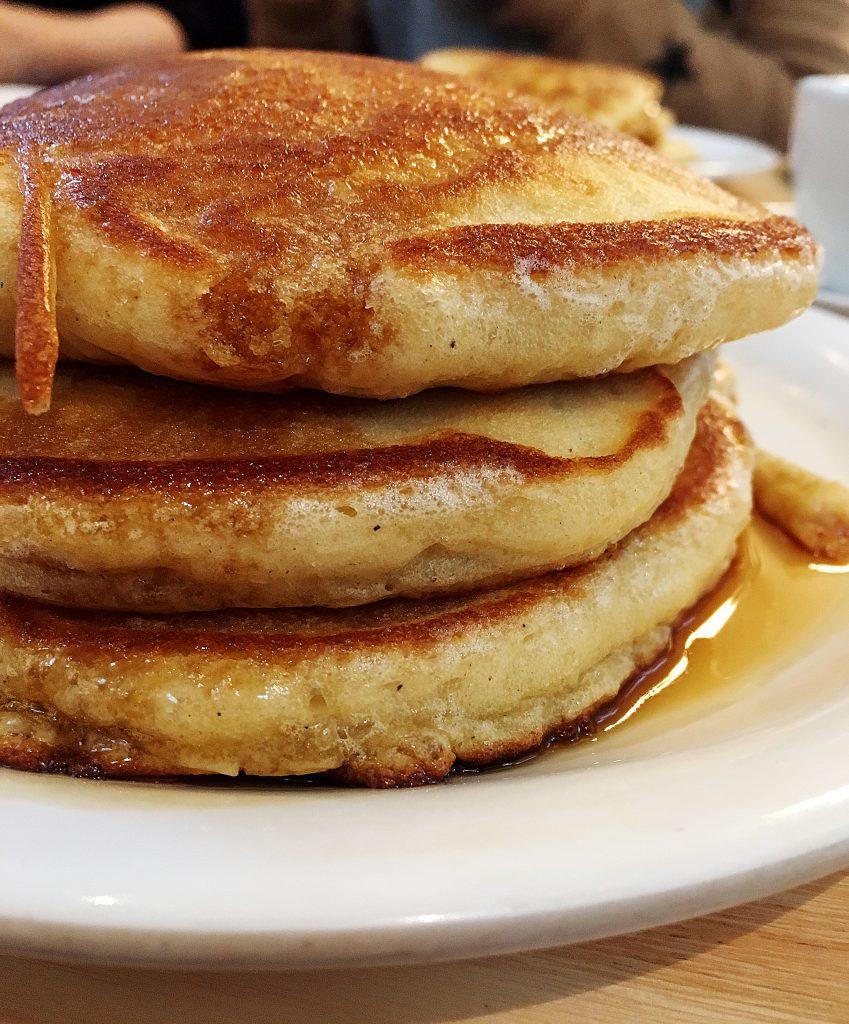 As you can see, we had a lot of food during our stay in Amsterdam. For me, the best thing I ate was the stroopwafel and both breakfasts. I just love sweet :).

Don’t have enough of Dutch food yet? There are more tasty Dutch treats you have to try.

What was your favorite thing you ate when visiting Amsterdam? 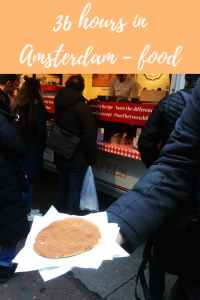