Every 2 years, there is Tour de Gueuze, the biggest bier event in Flemish-Brabant in Belgium. During the first weekend of May, all gueuze breweries and blenders in the specific gueuze region open their doors. This year these were: Boon, De Cam, De Troch, Hanssens, Lindemans, Mort Subite, Oud Beersel, Tilquin, Timmermans and visitor centre de Lambiek. Not connected to HORAL (the organizer of Tour de Gueuze) but still opening their doors is 3 Fonteinen. And also in the beer pub ‘In de Verzekering tegen de Grote Dorst’ there are things to do.

All these breweries and blenders can be visited for free during this weekend. Sometimes there are also extra activities and you can taste and buy special beers like HORAL Megablend 2019. This oude gueuze beer is a blend of young and old lambic from Boon, De Oude Cam, De Troch, Hanssens, Lindemans, Oud Beersel, Tilquin and Timmermans.

During this weekend, HORAL (The High Counsil for Artisanal Lambic Beers) also gives the opportunity to reserve a seat on one of their coaches. There are different routes and they all pass 4 different breweries. We booked our seat on the bus going to De Troch, Tilquin, Oud Beersel and Timmermans.

Was Tour de Gueuze worth it? Definitely! Do you need to take the bus? Not really, but it is more relaxing because you can drink whatever you want. Personally, I thought we stayed too long at the different breweries, but maybe this was more because the weather was bad. You could also visit different breweries by bike. Are we going to Tour de Gueuze 2021? Definitely! (but not sure about the bus).

Here you find the after movie:

Before we go into the different breweries we visited, just a short explanation about what lambic, (oude) gueuze and (oude) kriek really are.

Although gueuze tastes totally different compared to normal beer, they have the same base: malt, wheat and water. During blending and heating, the starch is transformed into fermentable sugars. After filtration, this is called the wort. Old hops are added and the mixture is boiled for 4-5 hours. After removal of the hop, the wort is transferred to the cooling ship. Here, the wort is exposed to the air and the micro-organisms present in it which give the unique flavour to lambic beer and thus gueuze.

The cold wort is transferred into barrels where the fermentation will take place.

Oude gueuze is a blend of young (1-year-old) lambic and older lambic. This results in a spontaneous fermentation in the bottle, giving the lambic some more bubbles. To be called oude gueuze, lambic of at least 3 years old has to be used.

Oude kriek is the result of the fermentation of sour (Schaarbeekse) cherries in lambic.

It is not exactly known when they started brewing at De Troch Brewery but some very old papers from 1820 mentioned a farm-brewery. After a long history, the brewery is run by Pauwel Raes since 2012.

At the beginning of the 80’s, there was some commotion in the world of gueuze and lambic beers: De Troch launched an exotic beer with banana and mango. It was on the market under the brand name Chapeau. After that, more beers with different fruits were launched. But Oude Gueuze is still a classic. 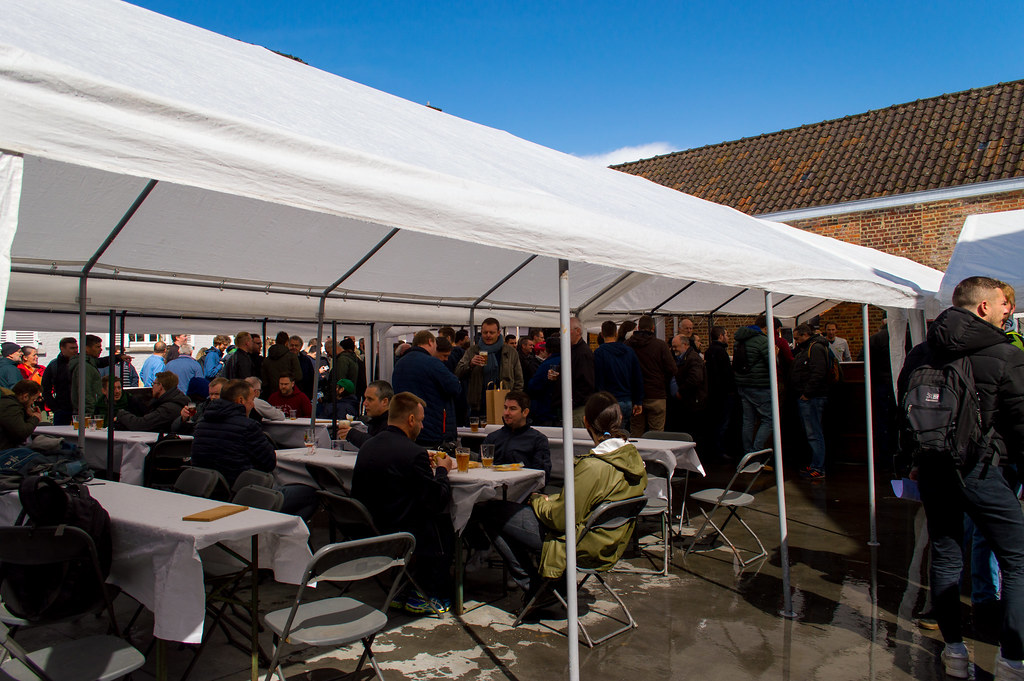 At De Troch Brewery, we tasted Chapeau Fraise, Chapeau Framboise and Oude Gueuze. The Chapeau beers were a little bit too sweet for me but perfect to start Tour de Gueuze. 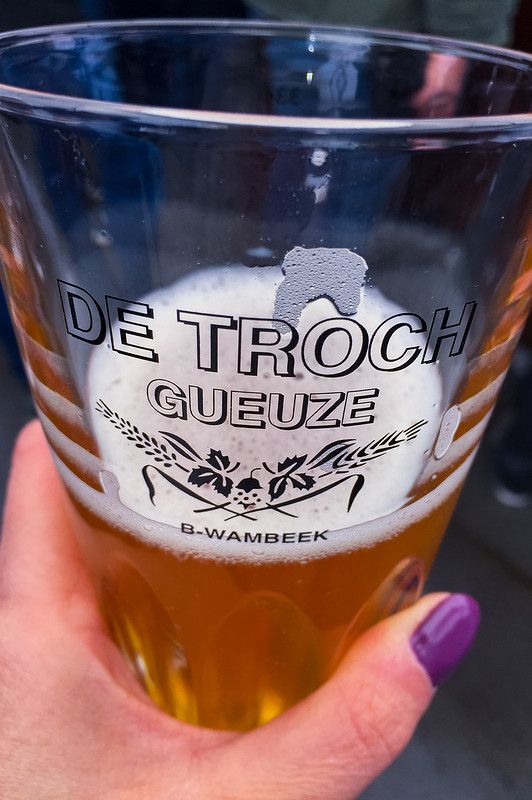 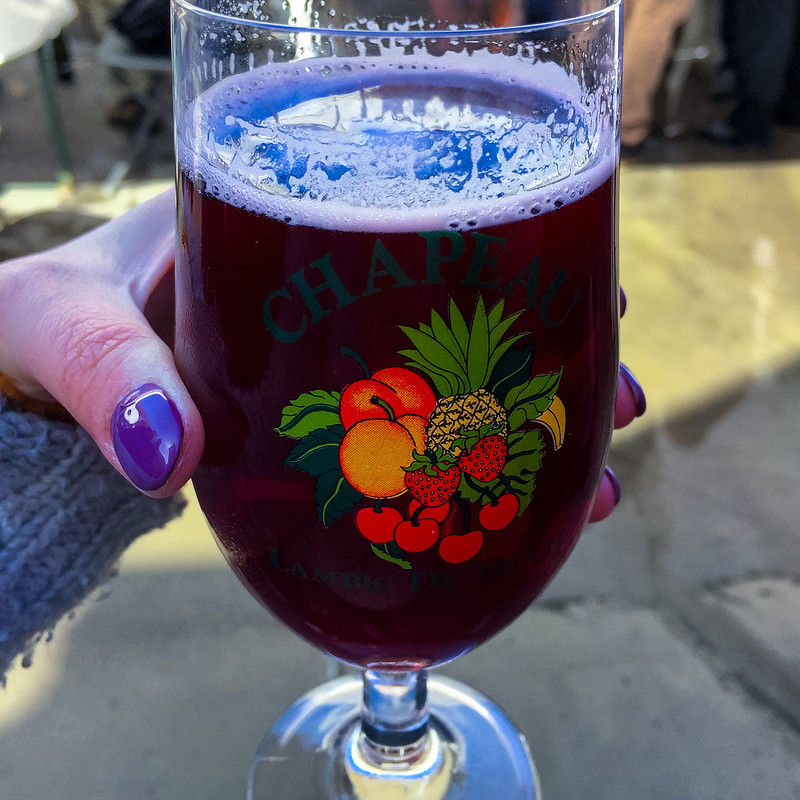 De Troch Brewery is open to buy beer from Tuesday till Friday from 8.30 till 12 am and from 1 till 6.30 pm. A visit to the brewery can be reserved through the website.

Gueuzerie Tilquin was founded in 2009 and is the youngest blender and the first one in the French part of Belgium.

Tilquin doesn’t brew beer himself but buys wort from different lambic breweries (Boon, Cantillon, Girardin and Lindemans) and lets it ferment and ripe in oak barrels for 1, 2 or 3 years. The lambics are then blended and bottled. After 6 months of refermentation, you get the Gueuze Tilquin à L’Ancienne.

By the way; Tilquin is the only gueuze blender that uses wort from Cantillon. 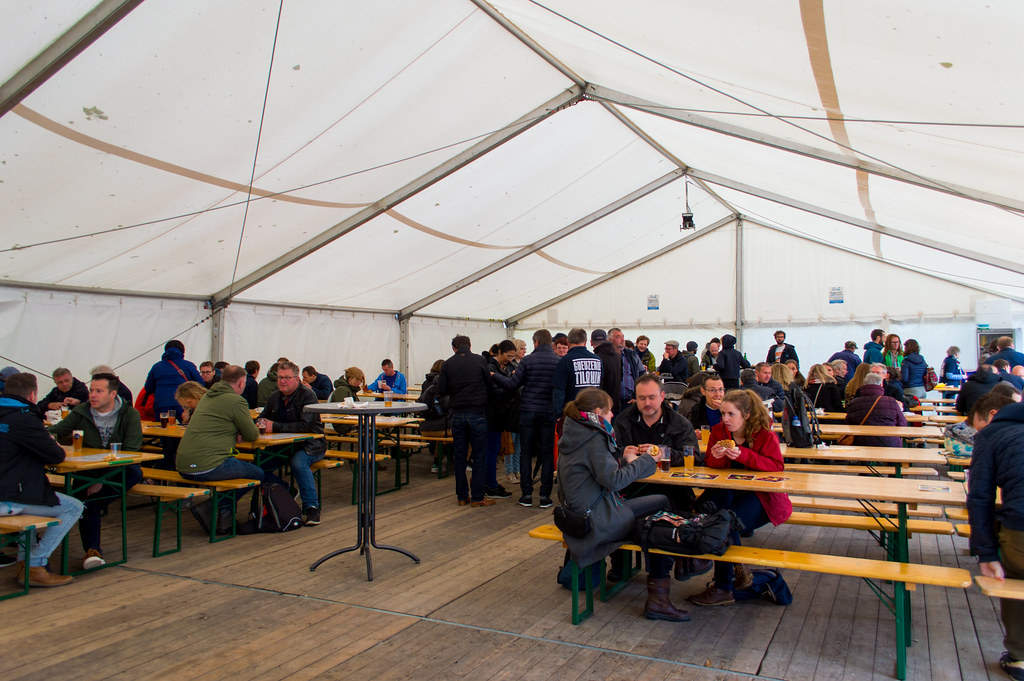 During Tour de Gueuze, we got a short (and fun) tour of the gueuzerie and we got the chance to ask a few questions to Pierre Tilquin, the owner. And of course, there is the tasting of lambic. Although it was a short tour, we learned a thing or two about lambic and gueuze. It really is a special and unique process. 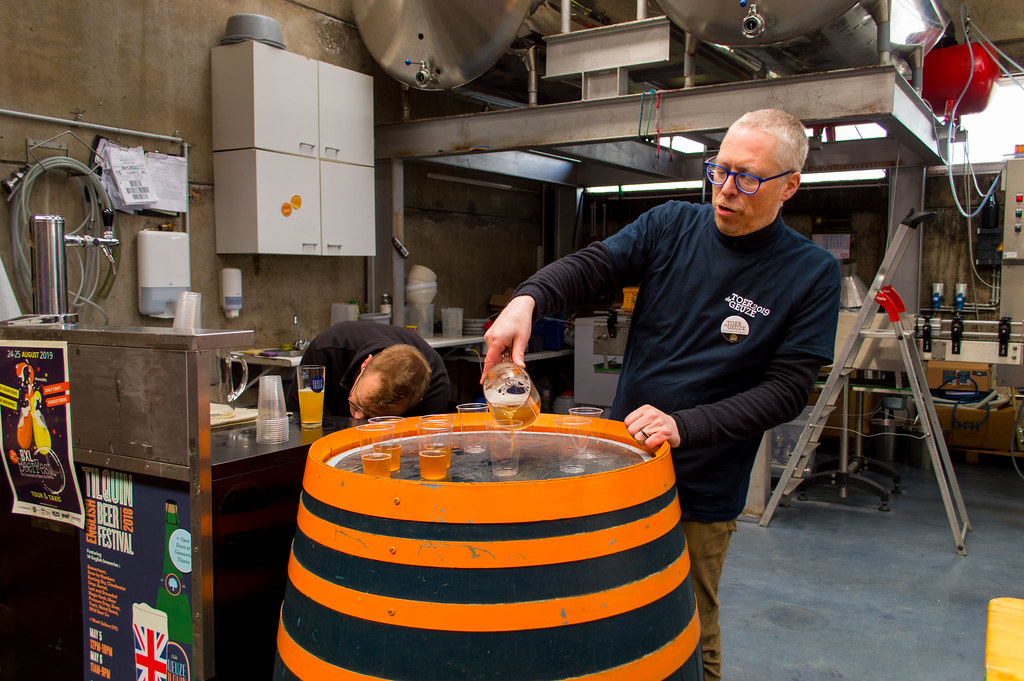 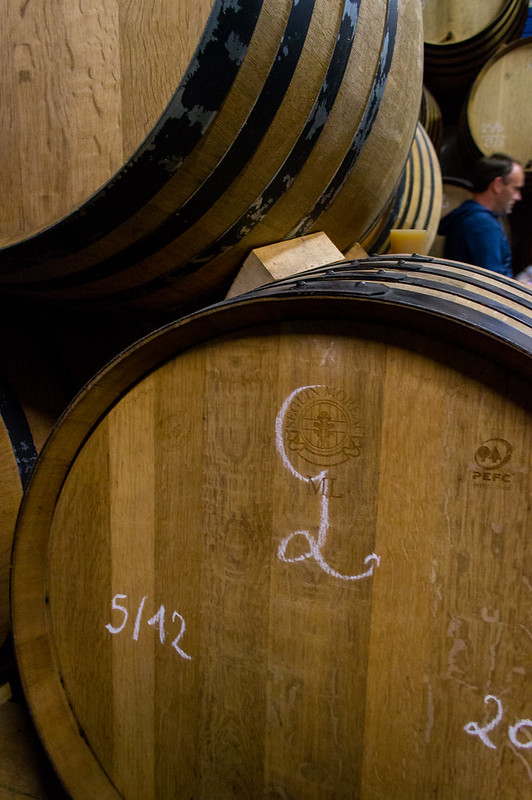 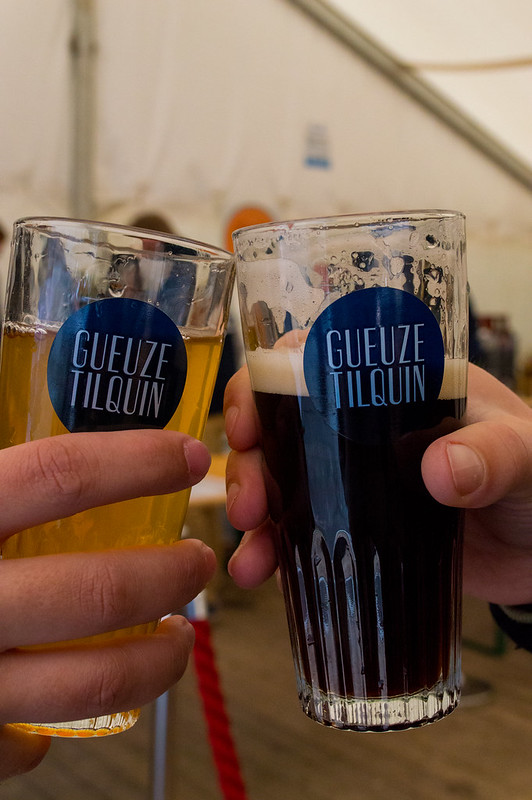 Next to oude gueuze Tilquin, you can also taste Gueuze Tilquin from the tap. This is a blend of lambic with a low alcohol percentage (Meerts) and 1 and 2-year-old lambic, matured in oak barrels. Refermentation takes place in stainless steel barrels or keykeg for at least 3 months. The wort for these lambic beers comes from Boon, Lindemans and Girardin.

We also tried Stout Rullquin, a blend of 7/8 Rulles brune (a stout beer) and 1/8 lambic blend of 1 year old. This will then mature in oak barrels for 8 months after which there is refermentation in the bottle/keg for 6 months. This truly was a surprise. I normally don’t like a stout but the addition of lambic made it less heavy and more drinkable for me.

You can visit Gueuzerie Tilquin as a group of at least 10 people and after making a reservation from Monday till Saturday. Every Saturday morning (10:30 am – 1 pm) from September till June, they are open for selling their beers.

Oud Beersel Brewery was founded in 1882 and is one of the oldest lambic breweries in Belgium. In 2015, the brewery was taken over and reopened.

We not only tasted oude gueuze and oude kriek, but also framboise. For this beer, fresh raspberries are used in combination with old lambic matured in oak barrels.

During Tour de Gueuze there was also the possibility to try ‘special edition’ oude gueuze. Oude Gueuze Barrel Selection oude Pijpen is a lambic matured for 20 months on so-called ‘oude pijpen’: wooden barrels of about 650 litres that used to contain port wine. The result is an oude gueuze with a very specific taste.

Another one was Foeder 21; a blend of beer matured on a specific white wine barrel and 2 other barrels with the same origin, with lambic of 3 years old and lambic of 1-year-old. This also resulted in a specific taste and smell of the oude gueuze. 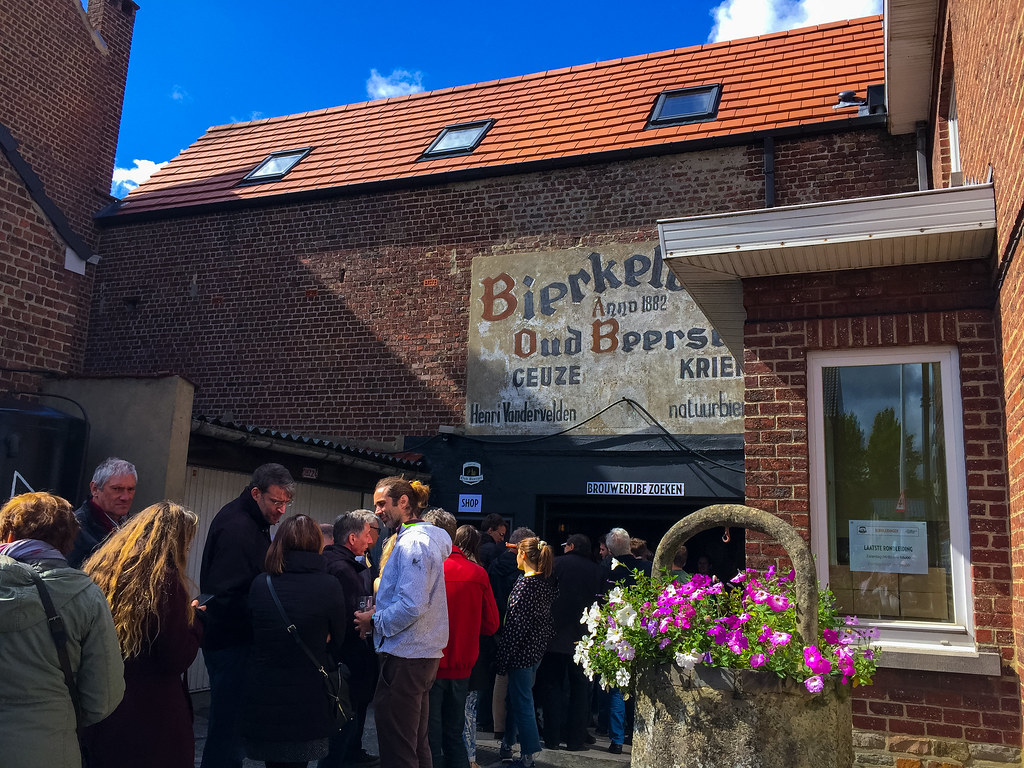 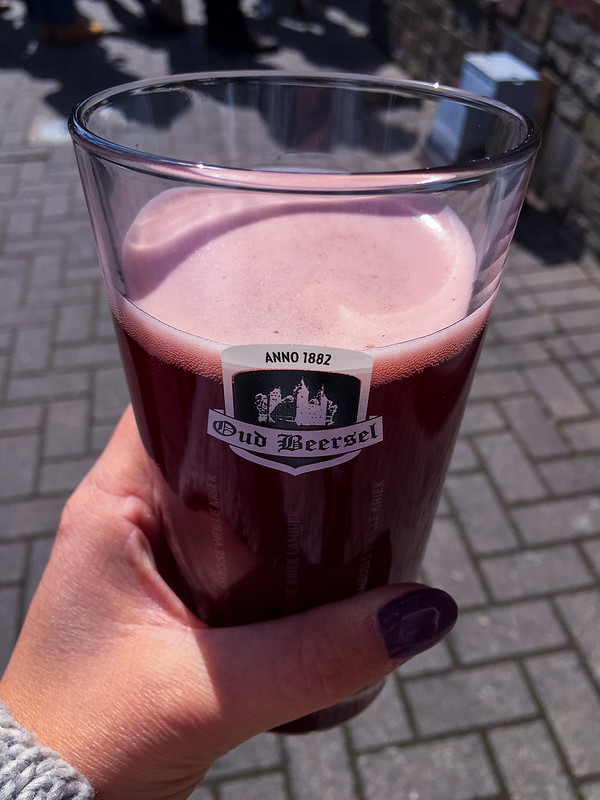 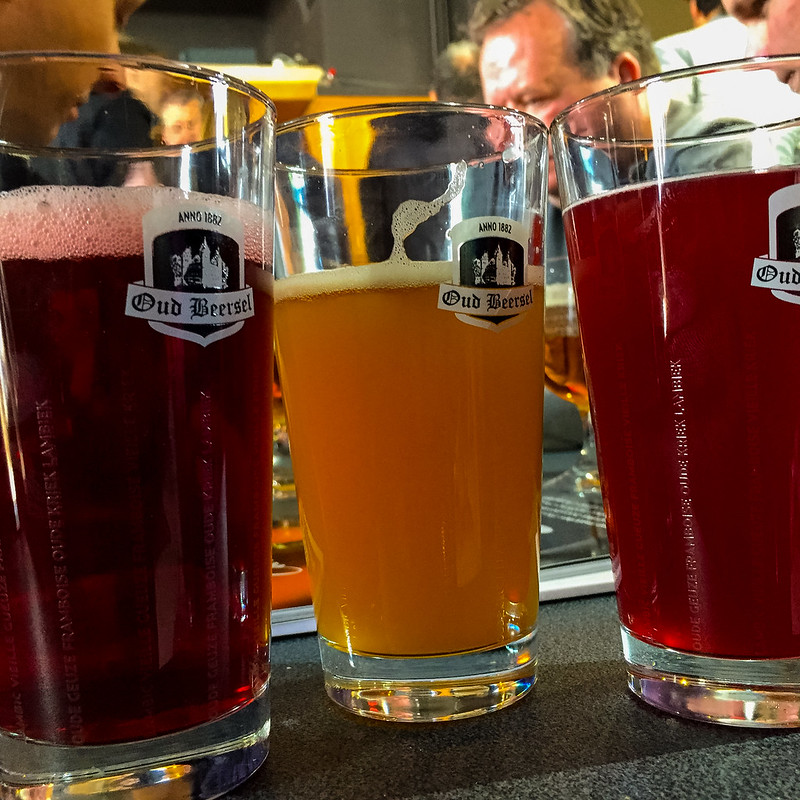 You can visit Oud Beersel Brewery as an individual or as a group. Individual persons can visit the brewery every first and third Saturday of the month at 1h30 pm. As a group, it is best to make a reservation beforehand. The price is 8 euro per person and includes the tour with a guide (45 min), a lambic tasting, 1 beer of your choice and an Oud Beersel gueuze glass.

At Timmermans Brewery they brew lambic for over 300 years, since 1702. From 1993, the brewery is part of Antony Martins “Finest beer selection”. 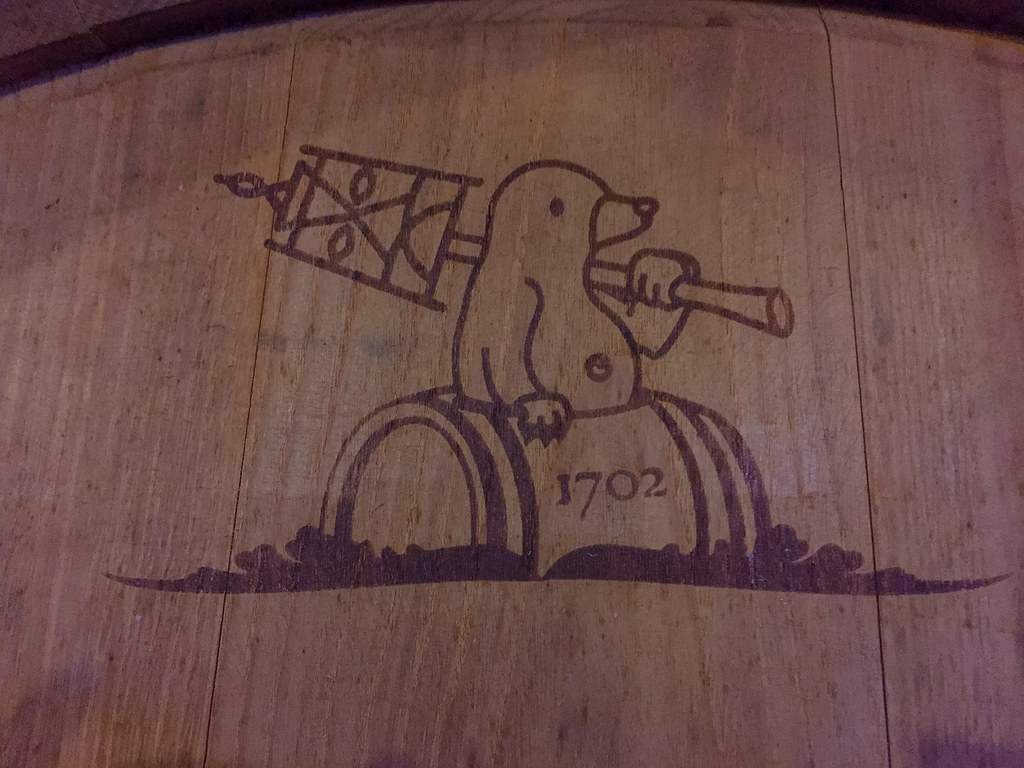 During Tour de Gueuze, they were brewing lambic at Timmermans. When we were there, the hot wort was already in the cooling ship, ready to cool down. We also got the discover the brewery on our own and enjoyed a little glass of lambic. 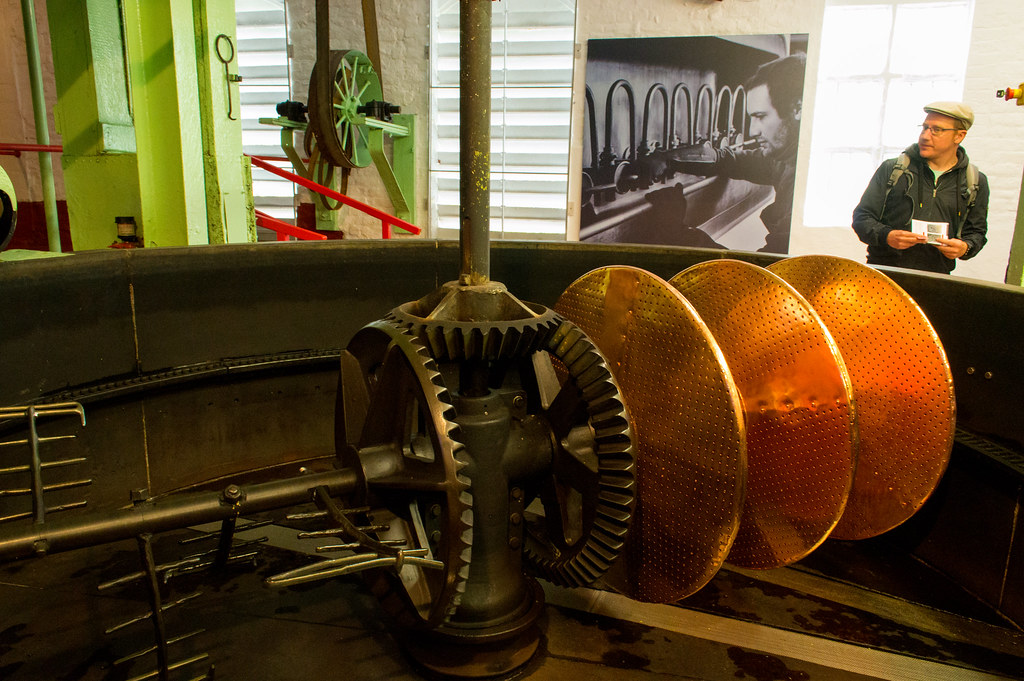 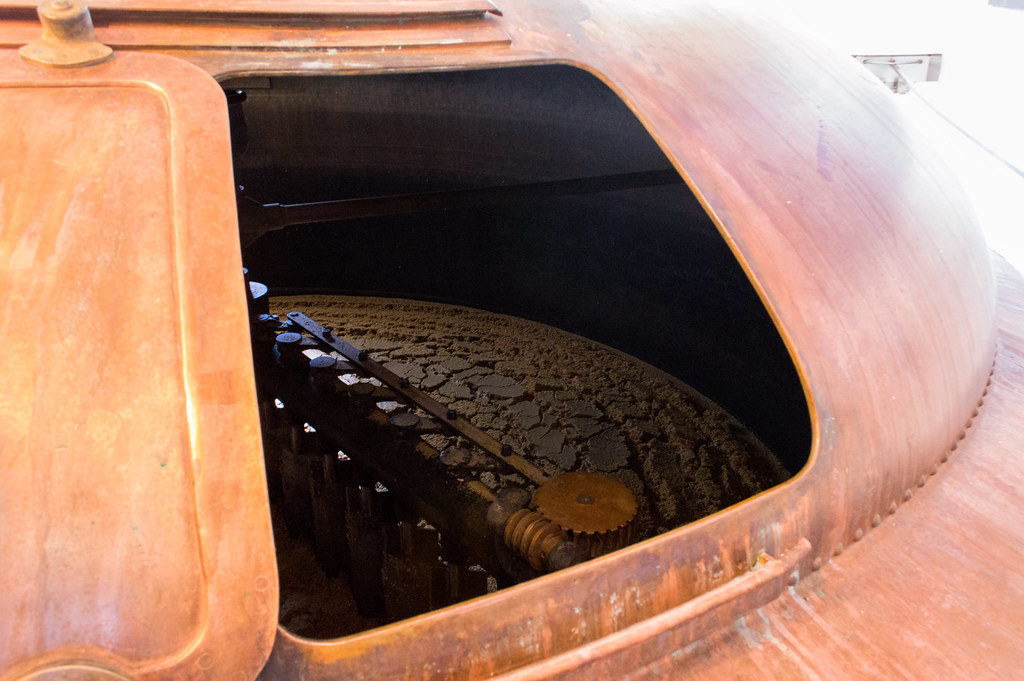 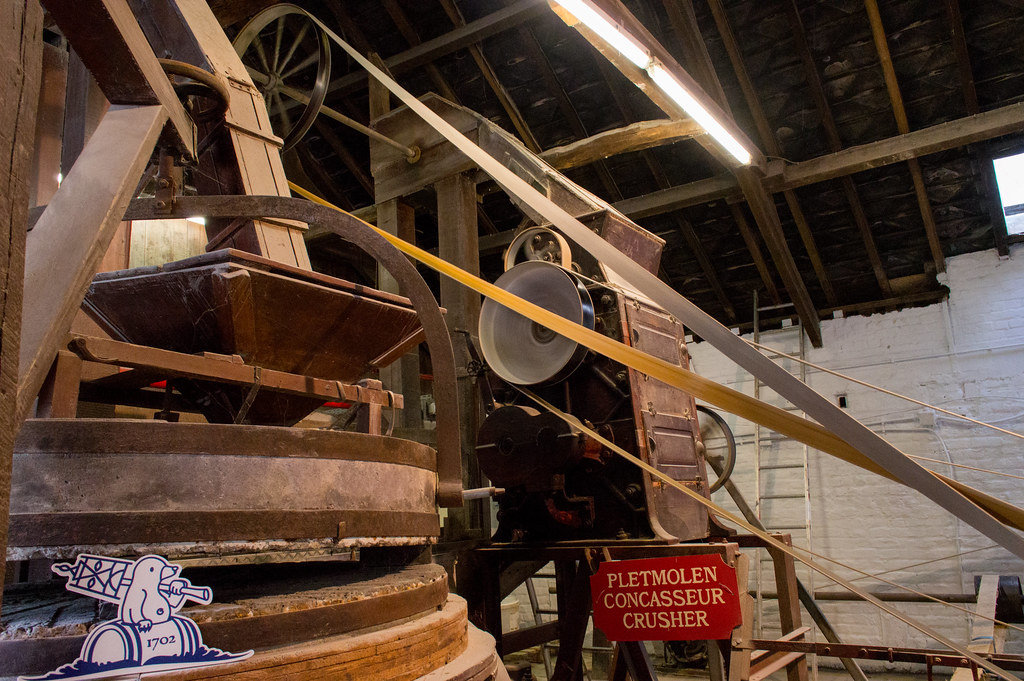 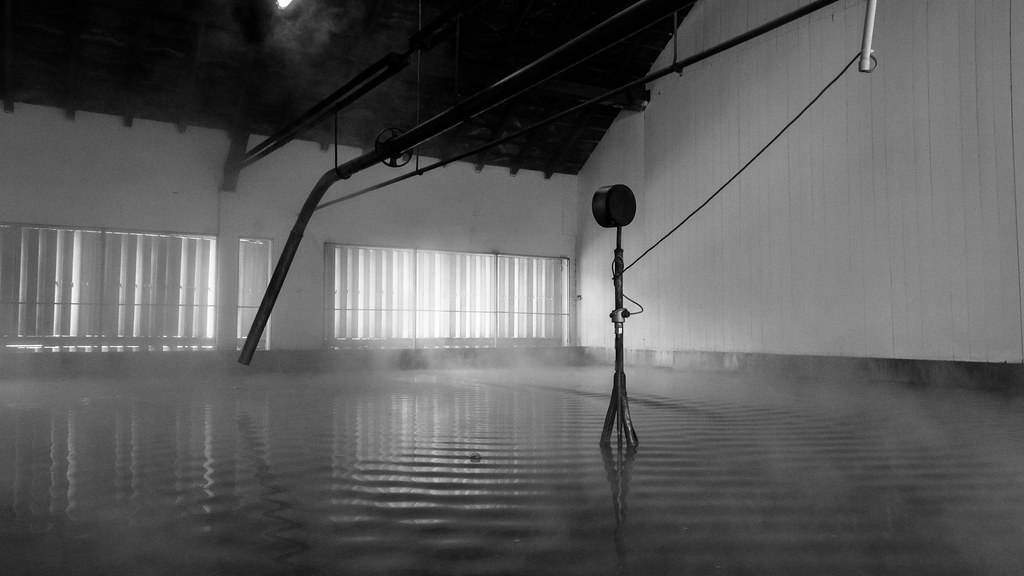 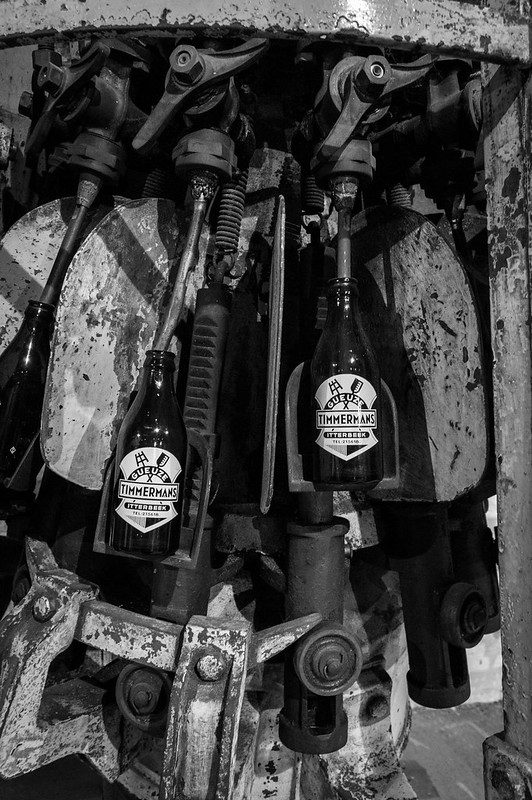 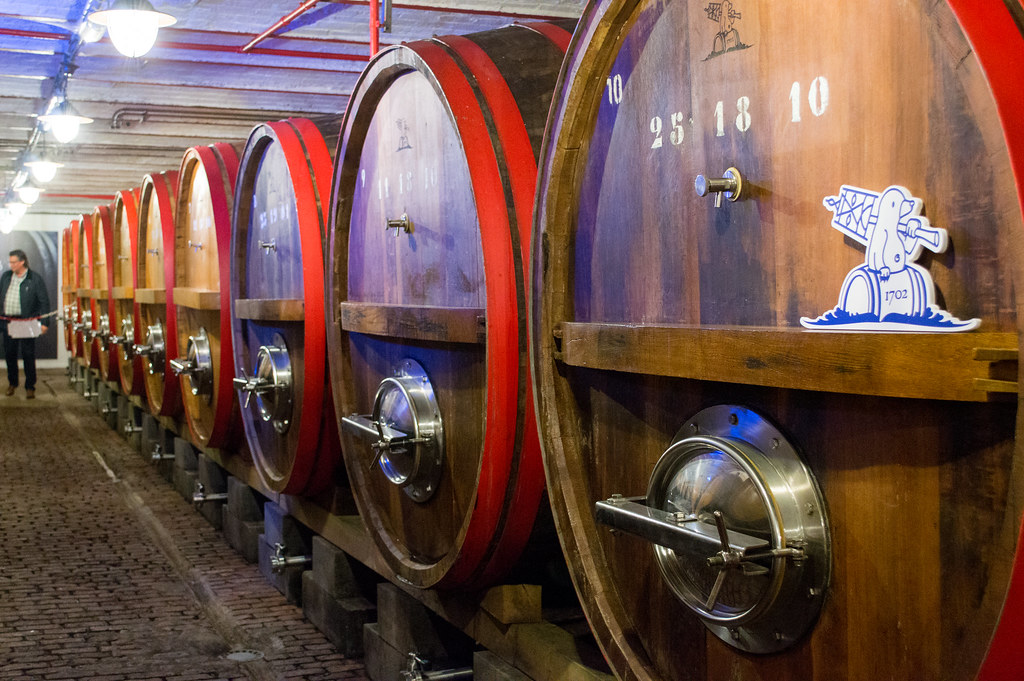 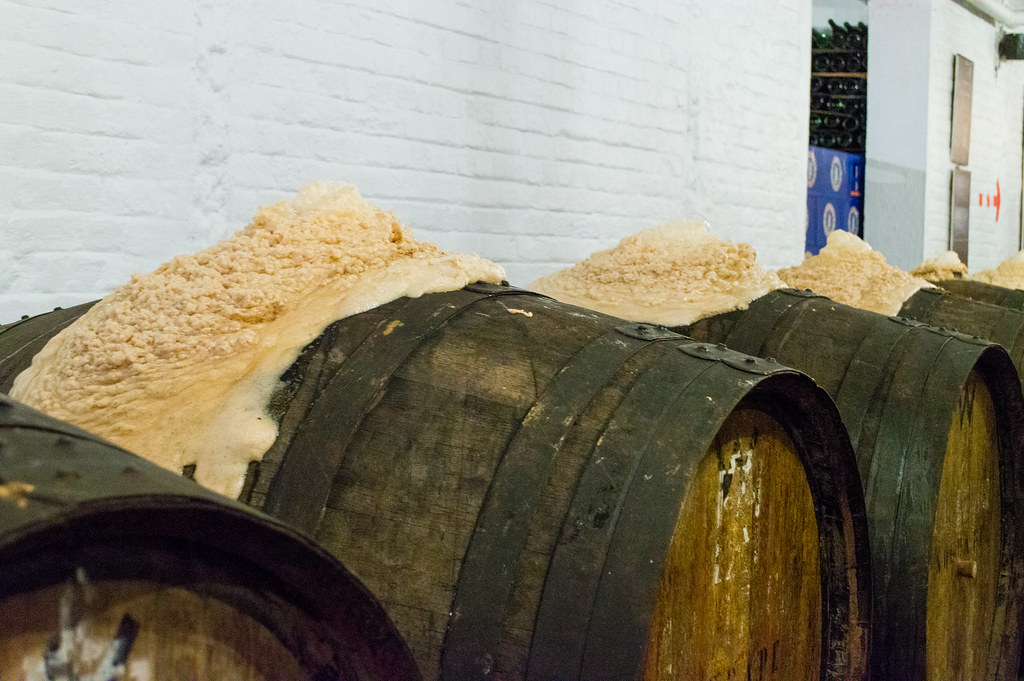 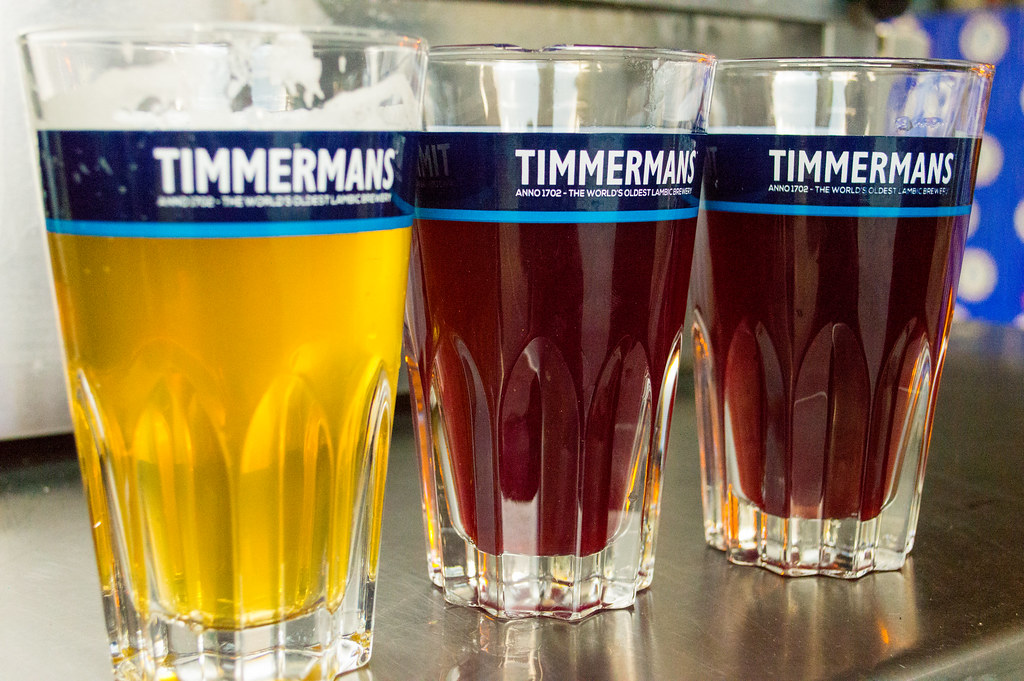 We enjoyed Timmermans Oude Kriek, which is incredibly sour, but oh so good. This was my favourite and the perfect ending of a very interesting Tour de Gueuze.

You can visit Timmermans brewery every second Sunday of the month at 2.30 pm. You can reserve your spot on the website. A tour costs €8.50 per person and also includes 2 beers.